BITZER, the refrigeration and air-conditioning specialist, was the main sponsor and namesake of this year’s U17 Pentecost football tournament in Rottenburg-Ergenzingen 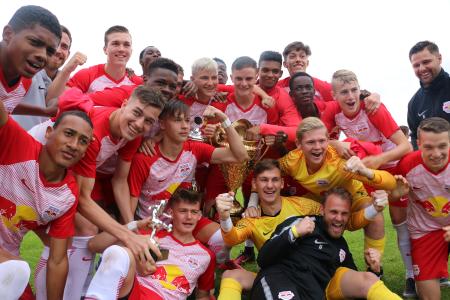 (PresseBox) ( Rottenburg am Neckar/Sindelfingen, 19-06-12 )
The 48th international U17 junior tournament was held in Rottenburg’s Ergenzingen district from 8 to 10 June. Turn- und Sportverein (TuS) Ergenzingen, organiser of the annual football event, brought together eight top-notch teams from five European countries again this year. As in the previous two years, FC Red Bull Salzburg won this year’s tournament, beating out Valencia CF 2:1 in the final.

Youth development and commitment to sport
BITZER, the long-standing Swabian company with its headquarters in Sindelfingen and its production facilities in Rottenburg’s Ergenzingen and Hailfingen districts, has been promoting commitment to sport and youth development for many years. As the main sponsor and namesake of the BITZER Cup, the company provided a set of football shirts for TuS Ergenzingen and the tournament cup, among other things. After the two tournament victories in 2017 and 2018, FC Red Bull Salzburg will again take the coveted trophy home to Austria this year.

The BITZER Group is the world’s largest independent manufacturer of refrigeration compressors. BITZER is represented across the globe by distribution companies and production facilities for reciprocating compressors, screw and scroll compressors, heat exchangers and pressure vessels. In 2017, 3,500 employees generated sales of €740 million.

Overview of images
Images may only be used for editorial purposes. They can be used free of charge if the source is given – ‘Photo: BITZER’ – and a free copy of the publication is sent to us. Images may not be modified or altered, except to crop out the background surrounding the main subject.