BITZER takes on the product pirates 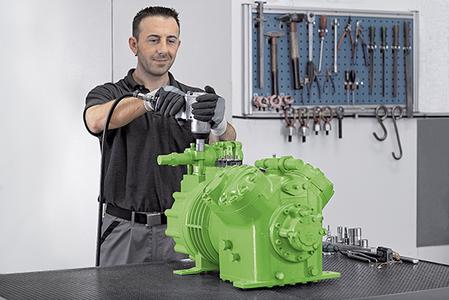 (PresseBox) ( Sindelfingen, 14-06-13 )
The long-standing BITZER company has decided to wage war on product piracy, which is on the rise. The world’s largest independent manufacturer of refrigeration compressors will be taking a more proactive approach to dealing with counterfeiters.

For some time now, BITZER has been observing an increase in product piracy among the company’s compressors, spare parts and pressure vessels. This development now has a negative impact on the entire industry and refrigerant manufacturers. This is unacceptable because, unlike with counterfeit watches or handbags, technical applications can be very dangerous when pirated products of poor technical quality are used. Aside from safety, the issue of performance clearly takes center stage, as it plays a key role in the customer’s purchasing decision. The performance data and the efficiency of pirated products cannot achieve the high standards of original BITZER products. Particularly in Asia, unscrupulous product counterfeiters now even go as far as copying the catalog data of BITZER compressors, which misleads buyers. But supposedly cheaper copies conceal another risk for users: the low-quality components significantly reduce both the service life and reliability during operation.
Product piracy has achieved highly professional results in the industry. Experienced counterfeiters copy BITZER compressors with a level of perfection that makes it nearly impossible to tell them apart from the original. While they make look the same, when it comes to quality, the poorly constructed components cannot withstand the high demands and will likely experience limited functioning after a short period of time or be completely defective and require repair.
In addition to complete compressors, BITZER also warns about copied spare parts and the use of fake refrigerants. This has already led to personal injury and death in the transport cooling industry, for example. What’s more, there’s a risk of motor damage, liquid slugging, heat damage and short circuits, which are often irreparable and can only be identified with in-depth analysis. And when copied spare parts are used, the warranty becomes void for the entire product. The BITZER Green Point offices are expert contact representatives when it comes to issues of compressor repair and provide customers worldwide with professional support in service, maintenance and training. As such, BITZER can optimally monitor the entire life cycle of its compressors and pressure vessels all over the world.
In the long run, supposedly cheaper copies are much more expensive than the originals. BITZER strongly advises against accepting unusually cheap offers for compressors, spare parts or refrigerants.

Professional counterfeiters
Counterfeits have become a mass phenomenon, and BITZER is increasingly taking legal action. Suppliers of such products are always thrown out of trade fairs and have to remove BITZER logos immediately. That’s because we’re dealing with a network of counterfeiters and distributors who sell very authentic-looking copies all over the world. The criminals pretend to be BITZER partners and thus harm both the company and the customers. Because it’s difficult to differentiate between an original and a copy visually, BITZER is now introducing a diverse range of measures to make it possible to clearly tell them apart. This will help to protect people’s lives and the commercial interests of both the company and the customers.

The BITZER Group is the world’s largest independent manufacturer of refrigeration compressors with sales companies and production sites for reciprocating, screw, and scroll compressors as well as pressure vessels all over the globe. In 2012, 3,046 employees generated sales of €639 million.