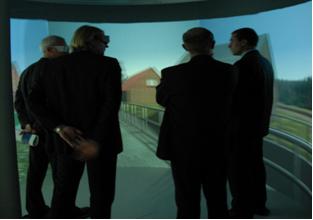 With a Cave system (Cave Automatic Virtual Environment) on the basis of the BS Cave, IPL Institute for production management & logistics GmbH in Munich and Bitmanagement Software GmbH in Berg near Munich market a stereoscopic visualization system together. It concerns a so-called round Cave, with which the three-dimensional depth effect is substantially strengthened as opposed to angular Caves. In addition it reveals that the round Cave systems are more economical by up to 75% on the hardware side than the conventional, angular solutions. Thus medium-size enterprises in particular can also use the advantages of Cave systems.

Cave systems are used for demonstrations of most diverse applications, with which a special depth effect reflects the reality in the best way. Possible operational areas range from the medical preparation on surgical interventions, to Design studies and design detail, representation of prototypes, up to the production layout, architecture and for virtual model production in the building and equipment construction. Even the behavior of passengers in critical situations in vehicles and aircrafts can be simulated. Universities also increasingly want to begin using Cave Systems for their training activities, which are facilitated by the new Cave solution.

For the marketing of the round Caves IPL has recently entered a cooperation agreement with Bitmanagement Software GmbH. In addition to the classical marketing model, the two partners agreed to an online model with which every interested customer gets free access to the detailed installation instructions, including any necessary data he needs for the procurement of individual components.

The software for BS Cave which is the so-called BS Cave package - consists of the BS Collaborate Server for distribution of stereoscopic images on multiple Cave computers and the client component BS Contact Stereo. The test versions of this software (with a floating watermark) are available at www.bitmanagement.de and can be downloaded for free with full functionality. The upgrade from the trial to the full version can be done by paying a license fee. The software based on the BS Contact Stereo meets the ISO standard VRML/X3D and industry standards - Collada, OpenJT (on request), CityGML and Google KMZ. It is both interactive and realtime and is especially usable in web applications. BS Contact and BS Contact Stereo meet the requirements of the 3D rendering of images, videos and models in the highest quality. It offers the benefits of a "State of The Art" standard 3D software and more than 10 continuous years of development.

Formed in 2002 by former employees of Blaxxun Interactive AG upon a solid technology foundation 10 years in development, Bitmanagement Software takes great pride in its proven track record of customer satisfaction and service delivery, its commitment to advancing Web 3D standards and its ongoing investment in technology and people, resulting in strong growth and positive cash flow to date and a positive financial outlook going forward.

Bitmanagement is one of the Board members of the Web3D Consortium (USA) which engages in the standardization and dissemination of 3D ISO standards for the Internet usage and a member of the "3D Consortium" at the same time for the dissemination of active stereoscopic visualization.