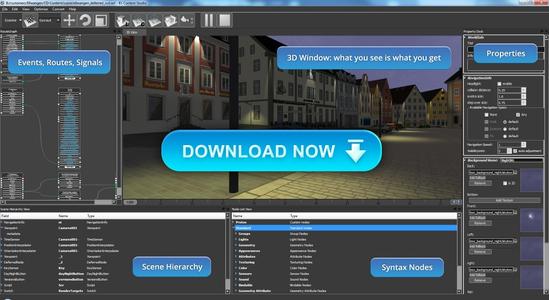 The German 3D software developer Bitmanagement Software GmbH who are in the board of directors of the Web3D Consortium in Mountain View, California, USA has released the new authoring tool "BS Content Studio", which enables a wide audience to create interactive and Internet ready 3D content. This tool will sustainable accelerate and simplify the work-flow and time necessary to compose, animate and optimize 3D models and interactive content for the web and standalone applications. Even "non 3D specialists" can be now in the position to generate 3D real-time applications easily.

The "BS Content Studio" tool based on the fast and stable C++ 3D Engine "BS Contact" is focused on augmenting 3D geometries which have been authored previously with third party CAD-,GIS- and design authoring tools with the possibility to interact, animate and publish stand-alone or on the Web. The optimized output referring to rendering speed, respectively 3D Internet delivery readiness and the integration in web-pages is provided in X3D and X3D binary format following its signaling, events and routing scheme. Doing so one is able to use 3D content across platforms (Windows/Linux/Mac/iOS/Android) and across browsers (IE/Firefox/Chrome/Opera/-Safari) and with the HTML5 formats in X3DOM.

The 3D world actually is facing obvious changes towards 3D apps on various mobile devices. With the new HTML5 format interactive 3D is more and more introduced also in modern websites. Right now the Web3C consortium is on its way to integrate X3D, the 3D format of the Consortium, into the coming new HTML 5 world. Thereto the X3D working groups have made multiple contributions to the W3C HTML 5 working groups for the purpose of integrating X3D with HTML with a new initiative called X3DOM based on Javascript and WebGL that is backwards compatible with X3D. "BS Content Studio" is the first full tool supporting X3DOM. The WebGL standard is developed by the US industry-consortium Khronos. The most considerable advantage offered by X3DOM is that there is no need for using plug-ins for end-users. The advent of WebGL and X3DOM will bring a remarkable change. However the rendering speed engines written in JavaScript such as X3DOM is considerably slower than the speed of C++ engines such as "BS Contact". Therefore for speed depending applications "BS Contact" is the engine of choice. In "BS Content Studio" users can decide between "BS Contact" and X3DOM exports formats for their application.

Peter Schickel, Bitmanagement CEO: "3D is simply more interactive than 2D and interaction drives modern web pages. We believe that with the new "BS Content Studio" tool Bitmanagement takes away much of the "blood sweat and tears" of 3D interactive content creation."

The development of the "BS Content Studio" - software is part of a ZIM-Project and co-funded by the German Federal Ministry of Economy and Technology, which has been approved by the "Deutsche Bundestag".

Bitmanagement is a provider of multimedia software with a focus on online interactive 3D visualization. The multimedia technology for 2D/3D, audio and video is real-time and Internet-ready. Based on the ISOstandard formats VRML/X3D, CityGML and COLLADA, and Java, it allows an Interactive visualization of concepts and products.

Besides software development the company specializes on content production. The focus is here on creation of interactive online capable 3D models - mainly high resolution city models - based on a cost efficient offshore team of 3D artists.