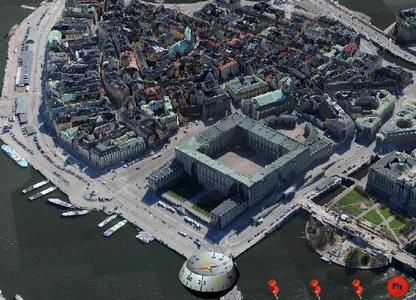 Bitmanagement, a leader in interactive real-time 3D software on the Internet, and directing board member of the Web3D ISO standard consortium today announced that they will reveal at this years computer graphics event Siggraph2008 in Los Angeles, USA, the visualization of automatically constructed 3D cities with their 3D viewer BS Contact.

"A coverage of complete 3D cities in 4 inch resolution can be realized now with a substantial cost reduction and viewed on the Internet with Bitmanagement's fast 3D viewer technology", says Peter Schickel, CEO of Bitmanagement and vice president of the Web3D consortium.

For fast visualization of large city datasets online, Bitmanagement's software now supports the latest X3D geospatial profile from the X3D-Earth initiative as well as the geolocation node from the Collada 1.5.0 specification announced today by the Khronos consortium. Bitmanagement enables the growing demand for Interactive Web3D Software for the mass market as 3D graphic cards are available widely throughout the homes of over one billion consumers who are connected to the Internet today. Leading brand names in all major industry segments from automotive to 3D multi-user communities have been won (please see below at About Bitmanagement).

Bitmanagement's main product is the highly performing 3D viewer BS Contact based on the ISO standards VRML/X3D and the industry standard Collada and Google's KMZ, used in applications worldwide and downloaded in the millions. Especially for serving international markets in USA, Europe and Asia, the software has been adapted to support UTF8/16 text characters for localization of customer applications, e.g. for Chinese or Hebrew text symbols. Customized OEM applications with more than 100.000 users in the first week after its online launch proves that interactive web 3D with photorealistic quality reached main stream market.

On the Siggraph exhibition in booth139 Bitmanagement will show their software as a cross platform approach, running on Apple, Linux and Microsoft systems as well as on mobile devices such as the new Intel Atom powered Netbooks. Presentations and demonstrations will be given by Bitmanagement in various tech-talks and meetings during the Siggraph and Web3D conference at

IT-Strategien von Organisationen haben sich in den letzten zehn Jahren rasant weiterentwickelt. Während früher alles in einem oder mehreren On-Premises-Rechenzentren verwaltet wurde, ist die IT mittlerweile zunehmend verteilt und weitaus differenzierter. read more
The publisher indicated in each case is solely responsible for the press releases above, the event or job offer displayed, and the image and sound material used (see company info when clicking on image/message title or company info right column). As a rule, the publisher is also the author of the press releases and the attached image, sound and information material.
The use of information published here for personal information and editorial processing is generally free of charge. Please clarify any copyright issues with the stated publisher before further use. In the event of publication, please send a specimen copy to service@pressebox.de.