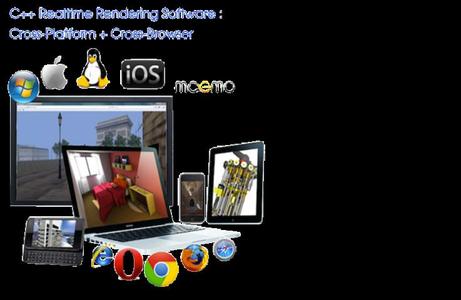 (PresseBox) ( Berg near Munich, 11-06-01 )
Bitmanagement a leading developer of 3D visualization software announced today that the BS Contact C++ renderer has been successfully ported from Windows to MAC and Linux systems as well as Apple IOS devices including iPhone 3GS, iPhone4, iPad 1, iPad 2 and iPod devices. The 3D internet software, which runs embedded in all major browsers implements both the ISO standard definitions X3D and VRML prepared by the US based Web3D consortium in a cross platform way.

With the official release of BS Contact MAC 7.2.19 on Mac the 15 years continuous development of the 3D renderer BS Contact has become platform independent. Moreover, the trend toward performing interactive visualization on mobile devices is taken into account through the port of the c ++ renderer BS Contact to handheld devices such as Nokia phones and iPad.

"The 3D content produced in line with existing 3D standards on the web ranges in millions already today. Our web plug-in BS Contact MAC presents this content embedded in Safari on Apple computers with the latest visual tricks and the speed known previously only from state of the art computer games. I look forward to receive further customer requirements and test feedback to our real-time web enabled software.", explained Peter Schickel, Managing Director and CEO from Bitmanagement.

The target markets for the cross platform and cross browser 3D engine are Computer Aided Design (CAD) , Geographical Information Systems (GIS) and Interactive Games. In the area of CAD, Bitmanagement has for example won Spatial Corp.USA, as a provider of the worldwide used ACIS Kernel Cloud services and delivers a customized version of BS Contact for the ACIS Scheme Web Toolkit (http://web3d.spatial.com). In the GIS area, Bitmanagement is used as a rendering partners in M.O.S.S. Computer Grafik Systeme GmbH for the OEM version of their 3D Wega-Viewer. In the game area, for example, the apocalyptic game "Leelh" is based on BS Contact.

Bitmanagement is a provider of multimedia software with focus on online interactive 3D visualization. The multimedia technology for 2D/3D, audio and video is realtime and Internet ready. Based on the ISOstandard formats VRML/X3D, CityGML and COLLADA, MPEG-4 and Java, it allows an Interactive visualization of concepts and products.

Bitmanagement was founded in 2002 by three former employees of the blaxxun interactive AG, Munich. The company achieved sales growth and positive result in 2009 and is "cash flow positive" since its founding."