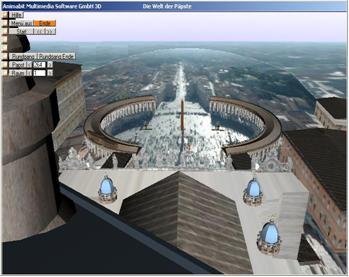 (PresseBox) ( Berg, 07-04-12 )
History of the papacy leads virtually through 2000 years history of mankind / owing to most modern 3D-technology the user becomes part of the documentation/based on the visualization software of Bitmanagement an interactive DVD, video and a PC version with fascinating image quality has been developed

There is probably nothing more exiting than to revive the past. The inquisitiveness of some humans seem to be almost illimitable. Even more exciting may become a looking back into mankind's history, if one can play his own part in a historical retrospection and if one can be involved to relive the past. People do not feel any longer comfortable with handling the future and the past only theoretically. Virtual reality applications filling in this gap. They however do not replace our phantasy, it rather accelerates our own imagination due to the nearly unlimited possibilities of new and newest technologies, like the current 3D techniques. They allow to create virtual realities, in which humans can move and act according to own wishes. A virtual journey through 2000 years of papacy will now be marketed - in time to the birthday of Pope Benedict XVI on April 16. The animations are based on the 3D visualization software of Bitmanagement, a software developing and marketing company located near Munich, Germany.

This venture was triggered by the intention of the two initiators - Dipl. Theologe Franz Böhmisch and Dipl. Ing. (FH) Hans Käser of the Multimedia Agency Animabit -, to set impulses for a new dialogue between citizens and churches. Motivated by the great popularity of Pope Johannes Paul IL as well as of the new Pope Benedict XVI, the initiators did not only want to rebuild the history of the highest catholic dignitaries verbally, but mostly visually. The history of Papacy, it means more than 2000 years, which had a great influence on the development of Europe and parts of the world, should not any longer remain reserved to theologians only.

What is more comprehensible than to make use of modern communication technologies, to create a documentation which is accessible to everyone, fetches back the past and makes it traceable, in which the user becomes his own actor. Diving into the history of mankind and overcome borders, as for example by flying in and over buildings, palaces, cathedrals and minsters. Some of these dreams of our 21.Century can be realized by virtual worlds. The documentation of the papacy, which will be available as DVD, video and PC versions, can be spread out around the globe without any problems on the Internet. Once Gutenberg achieved the dissemination of words throughout Europe by founding the typography, in our days it is accomplished by the modern Internet technology as the technology of our century, but even globally.

The 3D software of Bitmanagement meets exactly the requirements of the two initiators. This software is compliant to the world-wide most used 3D standards VRML and X3D. It offers perfect real time rendering, which means rendition of 3D models in real time, without any breaks and in a true-to-life manner. Real time compatible software however is above all also a precondition for interacting. Even the enormous number of data sets, which the rendering process usually has to master are no problem for the software of Bitmanagement. The company develops and markets its 3D Software under the brand "BS Contact VRML/X3D" world-wide. Workflow tools supporting the design phase of an application.