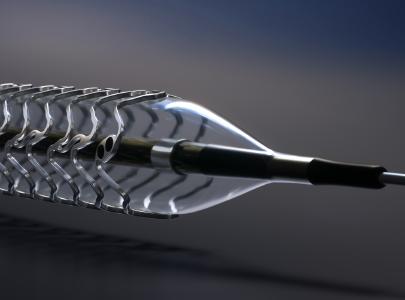 “We now have another set of evidence where even when pooling BIOSOLVE-II and -III data, Magmaris shows zero percent definite and probable scaffold thrombosis for up to 12 months in clinical trials,” stated coordinating clinical investigator Dr. Michael Haude, professor of cardiology at Lukas Hospital, Neuss, Germany. “This adds to our understanding that approximately 95 percent of the magnesium scaffold is being resorbed within 12 months.”

During his presentation, Dr. Haude showed angiographic follow-up of a total of 97 patients from BIOSOLVE-II and -III. The pooled in-segment late lumen loss (LLL) remains low with 0.25 mm ± 0.31 mm at 12 months. These data, together with the presented data on definite or probable scaffold thrombosis (zero percent) for BIOSOLVE-II at 24 months, confirm that the RMS is a safe and effective option for patients with de novo coronary artery lesions. Moreover, the pooled target lesion failure (TLF) rate of 3.3 percent at 12 months is comparable to second-generation drug-eluting stents.

“At a time when questions have been raised about poly-L-lactide (PLLA) scaffolds, we are pleased to once again report safe and efficacious results for Magmaris,” said Dr. Alexander Uhl, BIOTRONIK Vice President of Marketing, Vascular Intervention. “These data reiterate that magnesium-based resorbable technology is entirely different in both mode of action and clinical outcomes to PLLA-based bioresorbable scaffolds (BRS). We at BIOTRONIK remain committed to vessel restoration therapy based on magnesium technology.”

About Magmaris
Magmaris is a limus-eluting resorbable magnesium scaffold. Due to the scaffold’s magnesium backbone, it offers novel benefits that only a metallic scaffold can offer including improved deliverability, stronger radial support compared to PLLA alternatives and a fast resorption time of approximately 12 months. In addition, the proven BIOlute coating ensures controlled limus drug release.

A global leader in cardio- and endovascular medical technology, BIOTRONIK is headquartered in Berlin, Germany, and represented in over 100 countries. Several million patients have received BIOTRONIK implants designed to save and improve the quality of their lives, or have been treated with BIOTRONIK coronary and peripheral vascular intervention products. Since its development of the first German pacemaker in 1963, BIOTRONIK has engineered many innovations, including Magmaris, the first clinically-proven resorbable magnesium scaffold; BIOTRONIK Home Monitoring®; Pulsar-18, the world’s first 4F compatible stent for treating long lesions; Orsiro2, the ultrathin 60 micron drug-eluting stent; and the world’s first implantable cardioverter defibrillators and heart failure therapy devices with ProMRI® technology.

Viel Bürokratie, wenig Zeit für die Patienten: Das ist der Alltag des Pflegepersonals im Krankenhaus. Die Digitalisierung kann ein bisschen Entlastung bringen. read more
The publisher indicated in each case is solely responsible for the press releases above, the event or job offer displayed, and the image and sound material used (see company info when clicking on image/message title or company info right column). As a rule, the publisher is also the author of the press releases and the attached image, sound and information material.
The use of information published here for personal information and editorial processing is generally free of charge. Please clarify any copyright issues with the stated publisher before further use. In the event of publication, please send a specimen copy to service@pressebox.de.