Capturing the right moment is crucial in precise arrhythmia diagnosis 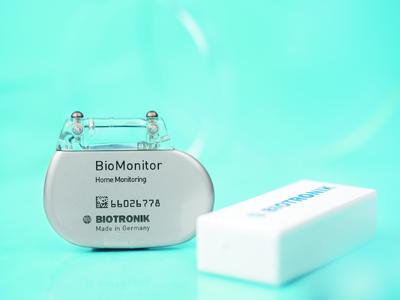 As the medical director of the Department of Cardiology and Intensive Care Unit and the Department of Internal Medicine and Angiology at Klinikum am Urban, Berlin, Germany, professor and cardiologist Dr. Dietrich Andresen has a lifetime of experience in diagnosing unrecognized arrhythmias. According to statistics compiled by the European Society of Cardiology (ESC), atrial fibrillation, just one type of arrhythmia, affects 1.5-2% of the population in the developed world. Some of those affected may have severe atrial fibrillation without even realizing it, which can lead to fainting and increases the risk of stroke five-fold.1

Because those with heart conditions can experience problems anytime, anywhere, it can be very difficult to capture the precise moment that an arrhythmia occurs. "When a patient is complaining about intermittent symptoms like heart palpitation, dizziness or fainting," explained Dr. Andresen, "it is extremely important that we be able to witness the arrhythmia causing these symptoms first-hand. Devices like BioMonitor can help."

BioMonitor, a unique, subcutaneous implantable leadless cardiac monitor developed by BIOTRONIK, is intended for the highly accurate and reliable long-term continuous remote monitoring of patients with arrhythmias such as atrial fibrillation, bradycardia, tachycardia or sudden heart rate drop. BioMonitor employs BIOTRONIK Home Monitoring® for the daily transmission of information, allowing for earlier intervention and therapy adoption. While some patients may need such a device for unexplained symptoms such as fainting, others may require it to detect episodes of atrial fibrillation after an ablation-a process in which cardiac tissue causing an abnormal heart rhythm is scarred or burned using a catheter. In either case, the more precise the information, and the more accurately and quickly it is captured after an event, the easier it is to intervene early with just the right therapy to prevent the patient's condition from worsening.

According to Dr. Andresen, whose motto is "safety first," BioMonitor is a step in the right direction. One of his most recent cases involved an ex-smoker in her early 50's with hypertension and typical atrial fibrillation for which she had successfully received pulmonary vein isolation. Afterwards, she continued to experience short and infrequent episodes of tachycardia that left her feeling extremely weak and light-headed.

In order to get to the root of the problem, Dr. Andresen implanted a BioMonitor, which sent him information about the woman's electrocardiogram (ECG) the moment a new episode struck. In a second cardiac catheter procedure, the arrhythmia was cured with an ablation. Since then, the patient has been symptom-free.

"We live in a time that allows us to monitor patients ever more thoroughly and efficiently," commented Dr. Andresen, "it is still simply fascinating that we are able to do this outside of the hospital, without any patient interaction-indeed, without the patient even being conscious of it. As a cardiologist, you want to capture an event the moment it happens. To be able to say 'that was it' and make a diagnosis based on fact, not an assumption."

What's more, until recently, implant patients could not undergo MRI scans due to the negative effects of strong magnetic forces on implant devices. Since BioMonitor has recently received CE approval for ProMRI® full body scanning, however, patients can rest assured that they will not be denied access to crucial MRI scans. In this way, BioMonitor markedly improves its users' quality of life.

One of the world's leading manufacturers of cardio- and endovascular medical devices, BIOTRONIK is headquartered in Berlin, Germany, and represented in over 100 countries by its global workforce of more than 5600 employees. Several million heart patients around the world have received BIOTRONIK implants designed to save and improve the quality of their lives, or have been treated with BIOTRONIK coronary and peripheral vascular intervention products. Since its development of the first German pacemaker in 1963, BIOTRONIK has engineered many innovations, including BIOTRONIK Home Monitoring® in 2000; the world's first 4F compatible 200mm peripheral stent in 2010; Orsiro, the industry's first hybrid drug-eluting stent in 2011; and the world's first implantable cardioverter-defibrillators and heart failure therapy devices with ProMRI® technology in 2012. This year BIOTRONIK celebrates its 50th anniversary.

Immer mehr mobile Gesundheits-Apps werden sowohl im persönlichen als auch im klinischen Alltag genutzt. Die Einsatzmöglichkeiten sind vielfältig und werden ständig erweitert. Damit bieten Gesundheits-Apps großes Potenzial und reale Hilfe, auch für Ärzte. read more
The publisher indicated in each case is solely responsible for the press releases above, the event or job offer displayed, and the image and sound material used (see company info when clicking on image/message title or company info right column). As a rule, the publisher is also the author of the press releases and the attached image, sound and information material.
The use of information published here for personal information and editorial processing is generally free of charge. Please clarify any copyright issues with the stated publisher before further use. In the event of publication, please send a specimen copy to service@pressebox.de.