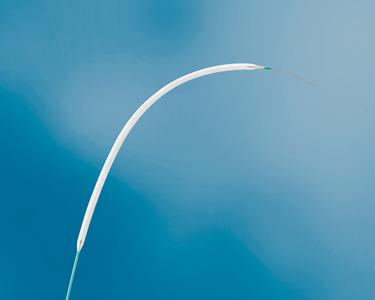 The safety and efficacy of the Passeo-18 Lux paclitaxel-coated balloon catheter in treatment of peripheral arterial disease (PAD) was established by the randomized, controlled BIOLUX P-I clinical trial1. The encouraging results, published in the Journal of Endovascular Therapy, are comparable to other scientific data suggesting that DCB is a viable treatment option and has the potential to become standard of care in the superficial femoral artery (SFA).

Unlike other DCBs, use of Passeo-18 Lux in infrapopliteal arteries is also supported by promising data from the multi-center, randomized, controlled BIOLUX P-II first-in-human clinical trial2, published in the Journal of American College of Cardiovascular Intervention in October 2015.

First results showed a trend towards more favorable outcomes for patients treated with Passeo-18 Lux DCB as compared to conventional percutaneous transluminal angioplasty (PTA)2. At six months, primary patency for Passeo-18 Lux patients was 82.9 percent vs. 73.9 percent in the PTA group. 59 percent of patients improved in Rutherford Classification in the DCB group vs. 47 percent in the control group. Finally, patients in the DCB group did not experience any major adverse events (MAE) at 30 days, and had a low major amputation rate at 12 months: 3.3 percent vs. 5.6 percent in the control group.

“Effective treatment of infrapopliteal arterial disease is quite challenging as it involves high-risk patients with severe comorbidities and critical limb ischemia (CLI), poor prognoses and considerable mortality rates,” stated BIOLUX P-II investigator and main enroller Dr. Marianne Brodmann, Medical University Graz, Austria. “Unfortunately, there is a lack of study data available regarding use of DCB in this complex area, and results have been somewhat contradictory. The results of the BIOLUX P-II trial are, however, encouraging. During the trial, Passeo-18 Lux paclitaxel-coated balloon catheter demonstrated safety and performance in the treatment of stenosis, restenosis and occlusion below-the-knee.”

Use of Passeo-18 Lux for below-the-knee indications will continue to be investigated, as the BIOLUX P-III Global All-comers Registry plans to enroll over 700 patients, including a dedicated below-the-knee indication subgroup. BIOLUX P-III is currently enrolling patients in Europe and Asia Pacific; six month results of the registry will be presented during a scientific symposium at LINC 2016 in Leipzig.

“Since receiving CE mark in 2013, Passeo-18 Lux has repeatedly proven itself in clinical trials, gaining the trust of physicians around the world,” commented Dr. Alexander Uhl, BIOTRONIK Vice President Marketing, Vascular Intervention. “Along with our rigorous clinical program, the addition of smaller diameters to the Passeo-18 Lux DCB portfolio further establishes our brand as a leader in lower limb therapies.”

Passeo-18 Lux is a novel combination device for treating de novo and restenotic lesions in the infrainguinal arteries. Its design is based on that of the proven Passeo-18 uncoated balloon catheter, combined with a balloon coating containing a matrix of anti-proliferative paclitaxel and butyryl-tri-hexyl citrate, a biocompatible excipient to enable optimal drug transfer to the target lesion tissue. This coating is also applied to Pantera Lux, a clinically proven coronary drug-coated balloon. Passeo-18 Lux also features the unique SafeGuard insertion aid, which improves ease of handling and protects the user and balloon coating from contact and damage. After use, SafeGuard can simply be peeled away.

A global leader in cardio- and endovascular medical technology, BIOTRONIK is headquartered in Berlin, Germany, and represented in over 100 countries. Several million patients have received BIOTRONIK implants designed to save and improve the quality of their lives, or have been treated with BIOTRONIK coronary and peripheral vascular intervention products. Since its development of the first German pacemaker in 1963, BIOTRONIK has engineered many innovations, including BIOTRONIK Home Monitoring®; Pulsar, the world's first 4 F compatible stent for treating long lesions; Orsiro, the industry's first hybrid drug-eluting stent; and the world's first implantable cardioverter defibrillators and heart failure therapy devices with ProMRI® technology.

Der Trend zur Automatisierung in Fabriken schreitet durch die Nutzung der Industrie 4.0 mit großen Schritten voran. Miteinander kommunizierende und kombinierte Technologien erhöhen die Effizienz, die Geschwindigkeit und reduzieren Kosten. Aber wie können Unternehmen die Vorteile nutzen? read more
The publisher indicated in each case is solely responsible for the press releases above, the event or job offer displayed, and the image and sound material used (see company info when clicking on image/message title or company info right column). As a rule, the publisher is also the author of the press releases and the attached image, sound and information material.
The use of information published here for personal information and editorial processing is generally free of charge. Please clarify any copyright issues with the stated publisher before further use. In the event of publication, please send a specimen copy to service@pressebox.de.