TechCampus Regensburg is picking up momentum 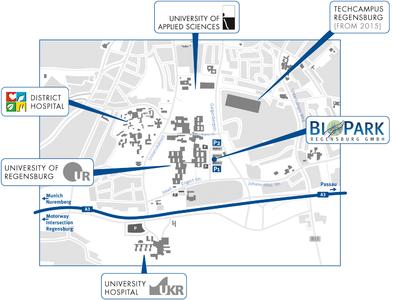 (PresseBox) ( Regensburg, 12-03-05 )
In the immediate vicinity of the University and the BioPark, the concept TechCampus Regensburg is currently developing on the former site of the Nibelungen Barracks. From 2015 the first technology-oriented companies should be able to move in here as owners or leaseholders.

Technology centres and technology parks have asserted themselves in Germany as goal-oriented instruments promoting the economy. Particularly in business locations with a distinctive technological profile and a broad scientific basis, vital impulses originate in the profiling of the location, promotion of collaboration of science and business and finally creation of new high quality jobs. The starting point for the successful development of the City of Regensburg as a technology location was the foundation of the University, the expansion of the Regensburg Technical College and the resulting resources and impulses for the economy. The development was supported by the municipal founding centres BioPark Regensburg in the field of the life sciences and IT-Inkubator Ostbayern in the field of information technology (IT). Today the technology location of Regensburg lives with a close working relationship between science and business. The development of a technology park with a clear technology-oriented profile should give businesses and the founding of businesses the opportunity to locate themselves in the immediate vicinity to the Regensburg university grounds and thereby profit all the more from the learning opportunities, the competencies and the know-how of the Regensburg tertiary institutions.

The Nibelungen Barracks were evacuated as the last of the previous four Regensburg barracks in 2007. With an area of around 35 ha, this is close to the city centre and directly next to the university campus, which also links the University Clinic and the BioPark with each other. The area became property of the City of Regensburg in 2011 and allows for important developments for a promising future within the city zone. Approximately a third of the area in the land development plan is to be used for commercial purposes and be developed as TechCampus Regensburg. The concept plans to spatially merge business and science on around 13 ha, bordering directly on the university campus. It offers space for external university research, young high-tech companies, established technology companies, an incubator for information and communication technology and further interfacing technologies such as sensory technology. The companies will have the choice of leasing financed premises via investors or to acquire their own property and build themselves. Currently the building development plan is being worked hard on, and a utilization concept is in existence.

From 2015 the first buildings in the TechCampus will be ready for occupancy.