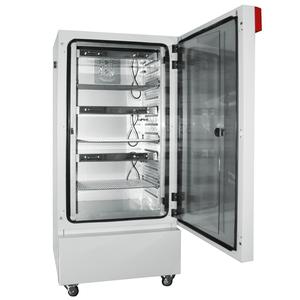 (PresseBox) ( Tuttlingen, 11-05-04 )
Rust fungi are among the most dangerous diseases to important crops such as wheat. If they spread unhindered, dramatic bottlenecks in the global food supply could result. In the laboratory, scientists at the Universität Hohenheim under the direction of Professor Dr. Ralf T. Vögele are researching the interaction of these fungi with their host plants and are searching for new strategies to combat them. "The influences that cause certain cycles with rust fungi can only be reproduced under these perfect conditions in the BINDER chamber and thus are the basis of our research," explains Professor Vögele, Head of Phytopathology.

The scientists work in three stages to study how rust fungi affect the plant and who they spread. The first stage is an exact reproduction with constant environmental conditions in the BINDER chamber. Then follows an experimental sowing in the greenhouse and then lastly field trials. The first phase is particularly important. Individual influencing factors can only be specifically observed and varied in the climate chamber - in nature, weather-related and other external factors cannot be observed in isolation. Above all, the exact reproduction of constant light and temperature conditions makes it possible to draw conclusions about the affects of fungus in individual growth phases of the plant. The team uses the unique patented lighting concept of the chamber to ensure the best conditions. The KBW climate chamber is equipped with flexible, positionable horizontal illumination cassettes that create significantly better and more homogeneous light distribution compared to lighting installed in the door. A broadband light spectrum of 75 - 80% daylight is optimal for plant growth. The illumination cassettes of the BINDER chamber have daylight lamps that can be switched in steps.

The second important factor is temperature control because temperature stimuli trigger certain growth stages in rust fungi. At 22 °C, for example, leguminous rusts have perfect conditions to cultivate spores. 20 - 30 °C trigger the infection cycle, which leads to crop damage. At 5 °C, the fungi produce winter spores, persistence forms and also the first step in sexual reproduction. The electronically controlled APT.line(TM) preheating chamber technology of the BINDER chamber ensures temperature accuracy in the range of 5 - 60 °C and reproducible results. The temperature can be digitally adjusted to tenths of a degree.

In the BINDER chamber, the infection structures of the fungus arise in darkness (lights off), at a temperature of 22 °C and 100% relative humidity in a mixture of milk powder and water. After just a few hours, the fungus has affected all the crops on the chamber. In nature, transmission occurs at night: the wind carries the fungal spores from plant to plant and entire regions are affected overnight. After 5 to 7 days, the plants begin to exhibit initial symptoms. After 14 days, the plant is so damaged that it only just survives - the parasite does not want to kill its hosts, rather it uses it as its supplier of glucose and fructose, which it is unable to produce itself. By the fungus actively intervening in the metabolism of the plant, it suppresses its defense mechanism, its resistance.

The team around Professor Vögele work on this basic research between 13 and 17 hours per day with the aim of discovering ways over the course of 20 years of eliminating the damaging affect of the rust fungus on global food. The scientists are not interested in fighting the symptoms as industry does with chemical pesticides, rather they are interested in tackling the causes, i.e. in stopping the fungus from spreading. The BINDER units are indispensable helpers in their efforts. "Our goal is to understand rust fungi, that would be an amazing success. Our research will last many more years and the BINDER chamber provides important support with its precise parameters," says Professor Vögele, Head of Phytopathology.