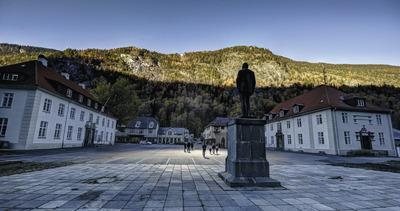 (PresseBox) ( München, 13-10-28 )
Rjukan in Norway is one of those places which are located in narrow valleys, meaning that they experience daylight but no direct sunshine in the winter months. To rectify this situation, Bilfinger Industrial Services Norway has installed heliostats above Rjukan to redirect sunshine into the town. The heliostats are to go into operation in a special ceremony to be held on 31 October 2013.

At a distance of around 850 metres above the town, the Bilfinger team of experts found the right place which receives direct sunlight throughout the entire winter and is in a direct line of sight to the market square. Three overlapping mirrors each measuring 17 square metres have been installed to compensate for scattering in the reflected light. They follow the course of the sun on a computer-aided basis, reflecting 80 percent of its direct light onto an area of 200 - 250 square metres at the market square. Known as heliostats, these mirrors have been specially designed for the cold, snowy and windy Norwegian winter and fitted with a further motor to move them on a vertical axis. In addition to normal operations, this also allows them to be placed in a night-time mode to reduce the amount of snow on the surface of the mirror. As well as this, there is a special mechanism to protect them from strong winds. The heliostats are powered by wind and sun energy.

After a difficult construction phase lasting just under one year, the project was completed in June 2013. Recalls Olav Hole, project manager at Bilfinger Industrial Services Norway: "The heliostats posed a major challenge for our team as it was not possible to use conventional systems here. Thanks to the expertise of the Bilfinger specialists, who came up with new ideas and planned the project with a high degree of precision, we were able to put this ambitious plan into practice. Now, we are eagerly waiting to see how the mirrors perform in the Norwegian winter and what the town population thinks of the new sunlight."

The idea of using heliostats to illuminate valleys in the winter is 100 years old. Businessman Samuel Eyde, who established Norsk Hydro in 1905, had the idea of bringing sunlight into the valley. However, his attempts to achieve this goal failed due to the inadequate technology available at the time. Instead, Norsk Hydro built the Krossobanen, the first aerial tramway in Northern Europe, in 1928, allowing employees to spend a few sunny hours in the mountains during the winter. Rjukan artist Martin Andersen returned to the idea of a heliostat ten years ago in an artistic project entitled "How to lighten up the shadows in the valley". Bilfinger Industrial Services Norway commenced work on the project in summer 2012, after the previous contractor had been unable to meet the requirements.