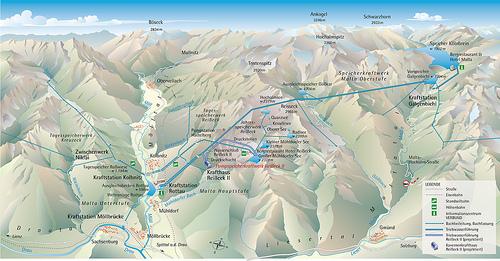 (PresseBox) ( Munich, 11-07-20 )
With the contract for the Reißeck II pumped-storage station in Carinthia, BIS VAM Anlagentechnik, which is domiciled in Wels, Upper Austria, is charting a new course: for the first time, the high-pressure penstock lining will be assembled using thermomechanic steel with a strength class of 690N/mm². VERBUND, Austria's leading electricity company and one of the largest producers of electricity from hydropower in Europe, has awarded the Bilfinger Berger Industrial Services Group (BIS Group) subsidiary a contract for the planning, production and assembly of the high-pressure penstock lining and related components.

In addition to the high-pressure penstock lining, BIS VAM Anlagentechnik is also fabricating and assembling the related distribution piping with a weight of 132 tons, two inlet pipe flaps with a width of 3.60 metres, a height of 2.40 metres and an operating pressure of 20 bar and, together with a partner, two ball valves with a diameter of 1,600 mm and an operating pressure of 105 bar. Detail engineering was largely completed at the end of May, with assembly planning currently under way. Actual assembly will commence in around a year's time.

Explains Gerhard Schmidt, a member of the BIS Group's Executive Board: "The BIS Group is one of the leading players in plant engineering and assembly services for the energy industry. With the expertise of our engineering specialists and the high quality achieved in the execution of projects, the company is making a crucial contribution to securing energy supplies particularly also in the area of renewable energies."

BIS VAM Anlagentechnik has an international customer base. Currently, it is engaged in assembling activities for overhauling a penstock in Belesar in Spain. Prior to this, it has been involved in hydropower projects in Cleuson-Dixence in Switzerland, Borcka / Muratli in Turkey and San Roque in the Philippines. In Pakistan, the company assembled the world's largest penstock.

Looking forward, August Oberndorfer, the managing director of BIS VAM Anlagentechnik, wants to step up the company's internationalisation strategy even further: "We have decades of experience and are one of the world's leading companies in this sector. Over the next few years we want to additionally extend our international activities."

62 percent of the gross volume of electricity produced in Austria (69 TWh) in 2009 came from hydropower stations. In Carinthia, VERBUND is extending the existing facilities of the Malta and Reißeck/Kreuzeck power station groups with the construction of the Reißeck II pumped-storage station. This will result in a more than 40 percent increase in output from 1,029 MW to 1,459 MW. In addition to the additional output, Reißeck II will permit more efficient utilisation of the existing systems as they will be joined by the new piping. A further characteristic of the project is the fact that all the new units to be constructed are located in a subterranean cavern, tunnel and construction system, meaning that no new reservoirs are being built.

VERBUND is Austria's leading electricity company and one of the largest producers of electricity from hydropower in Europe. The company generates more than four fifths of its electricity from hydropower, supplemented by thermal and wind power. Together with its subsidiaries VERBUND has over 4 million electricity customers and trades in electricity in 20 countries. With around 3,000 employees, it reported annual revenues of EUR 3.3 billion in 2010. Via its subsidiaries and partners, VERBUND is active in electricity production, transportation and distribution as well as international trading and sales. VERBUND has been listed on the stock markets of Vienna, Frankfurt and London since 1988; 51% of its capital is held by the Republic of Austria.

Further information can be found at www.verbund.com.

Bilfinger Berger Industrial Services (BIS) provides industrial services chiefly targeted at the process and energy production industries. These services cover the entire life cycle of industrial assets and comprise individual activities, engineering, piping, plant assembly, extensive maintenance models and demanding large-scale projects. Established in 1887, Rheinhold & Mahla AG as the Company was previously called, or the BIS Group as it is known today, has around 28,000 employees and generated total revenues of over EUR 2.9 billion in 2010. A member of the Bilfinger Berger Multi Service Group since 2002, the Company has numerous operating companies across Europe as well as in North America. Further information available at www.BIS.bilfinger.com.