Engineering at the Forefront 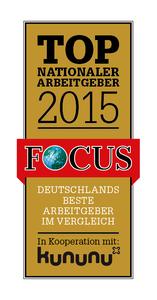 (PresseBox) ( Ingolstadt, 15-01-27 )
On 26/01/2015, the German news magazine FOCUS honoured the automotive engineering developer BFFT as "Best German Employer" in the category of automobile industry/mid-sized companies. The Ingolstadt company thereby offers its employees a place at the forefront once again.

Like a blue crystal, the Museum of Communication in Berlin, Germany, shines from the inside out at dusk. Last night, company representatives honoured by the economic and financial magazine FOCUS as "Best German Employer" shone there as well - among them Markus Fichtner, founder and managing director of the Ingolstadt automotive engineering developer BFFT, who is once more the holder of the "Best German Employer" seal.

FOCUS compiles the employer ranking yearly together with the career network Xing, employer rating platform Kununu and statistics portal Statista. They ask employees what makes them happy at their jobs and whether they would recommend their employer, among other questions. In 2015, ratings were received from over 70,000 employees from all hierarchies and of all ages, and 22 branches.

BFFT was the 2014 winner in the FOCUS employer ranking in the category of auto-mobile industry/mid-sized companies. Taking second place this year, the company again belongs to the best employers in its field. "I am incredibly pleased that we are once again among the Top 3. For us, this means the employees' high regard for their employer has remained just as high as last year," said Markus Fichtner.

BFFT's reputation as employer at the forefront has not come about by chance. Markus and his twin brother Frank Fichtner think of a lot of things in order to offer employees "fun at work". All employees, from trainees to directors, are on first-name terms and do business with a word and a handshake in the old Bavarian tradition. There is a modern fitness studio for workouts throughout the day. Furthermore, there are regular employee events, among them exclusive "BFFT Fansofas" at the football stadium, in the ice hockey arena and at the 3D movie theatre.

In addition, BFFT counts automobile trends such as infotainment, electrification and driver assistance systems among its core competencies, giving it a position at the forefront of engineering developers. For example, BFFT took over part of the mechanical and electrical modification of the Audi RS7 piloted driving concept, which raced around the track, driverless, at the DTM season finale at the Hockenheimring, Germany. The Ingolstadt mid-sized company is also growing accordingly racy. "We are always on the lookout for young technical talents and experienced engineers," says Frank Fichtner. The award for "Best German Employer" has come at just the right time - a good starting point to find suitable staff for further growth.

The BFFT Gesellschaft für Fahrzeugtechnik mbH is an automotive engineering developer that focuses on electrical systems and electronics (BFFT = Behr Fichtner Fahrzeugtechnik). The company was founded in 1998, has expanded continuously since then and is part of the EDAG Group since 2013. The employees work at the headquarters in Gaimersheim near Ingolstadt (Bavaria) as well as in other offices in Germany, China, England, Italy and the USA. The range of products and services extends from initial concepts, prototypes and series-ready system developments to their qualification and protection. Examples for development areas include infotainment, energy and driver assistance systems as well as connectivity. Our contractors and partners are primarily the international automotive industry and their suppliers.

Golf at the Speed of Sound