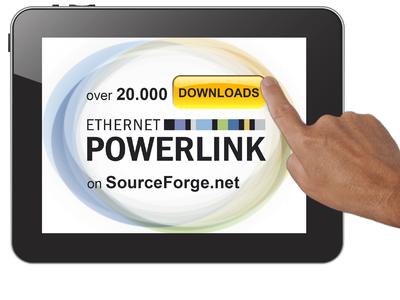 (PresseBox) ( Berlin, 13-09-24 )
Five years after the open source POWERLINK stack was first published on SourceForge.net as openPOWERLINK, the download count crossed another threshold in September 2013. By surpassing the 20,000 mark, openPOWER-LINK has set a new download record for an industrial communication stack.

"The decision to make openPOWERLINK available as a free download has brought sustained growth in the number of system integrators using this ad-vanced communication standard," says Stefan Schönegger, managing director of the Ethernet POWERLINK Standardization Group. "In addition to being free, POWERLINK is also the first and only industrial real-time Ethernet standard to fulfill every aspect of open source software - all of which have contributed to its success."

Open source in every aspect

openPOWERLINK, the open source software stack used to implement the POWERLINK real-time Ethernet communication standard, meets every criteria for open source software. Equipped for both master and slave implementations, it is available for a wide range of operating systems, including Windows, Linux (including real-time variants using the RT-preempt patch) and VxWorks, and has been designed for easy portability to any hardware platform and operating system.

Most significantly, openPOWERLINK is available under a BSD license, which grants system designers full rights to the software and makes POWERLINK the only truly vendor-independent Ethernet-based industrial communication stand-ard around.

It therefore comes as no surprise that more and more leading device and sys-tems manufacturers are integrating POWERLINK into their products. open-POWERLINK download numbers are soaring - with no sign of slowing anytime soon.

The Ethernet POWERLINK Standardization Group (EPSG) is an independent organization founded in 2003 by leading companies from the fields of motion control and automation technology. Its aims are the standardization and further development of the POWERLINK protocol first introduced by B&R in 2001. This high-performance real-time communication system is an advanced protocol based on the IEEE 802.3 Ethernet standard designed to ensure real-time data transfer in the microsecond range. The EPSG cooperates with leading standardization organizations such as CAN in Automation (CiA) and the IEC. Anton Meindl, business manager of Controls at B&R, is the organization's CEO.