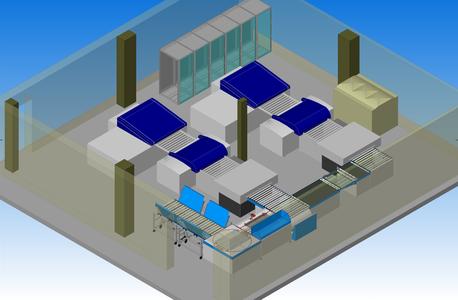 (PresseBox) ( Abensberg, 13-06-24 )
Control Media, a rapidly growing printing company in Belgium, decided to order a new press. As the existing pre-press department would not have been able to deliver enough plates, the medium-sized printer contacted manroland Benelux N.V., the Fujifilm distributor for Benelux, for a fully automated plate-processing line. In close cooperation with BEIL-Registersysteme GmbH, Germany, manroland Benelux came up with a turn-key solution and the corresponding room layout plans. Hans Bryns, Workflow-Manager at Control Media, is still impressed by the seamless cooperation between the three companies involved „We were quite impressed by BEIL. Even after the order was placed, they converted our suggestions and change requests into real products – without hesitation and lag of time “.The cooperative climate also becomes evident by the efficient project realisation: It did not even take 14 weeks from order to installation. In parallel with the upgrade of the pre-press department, Control Media also installed a new Workflow system.

In preparation for their new press, the Belgian print house refurbished its pre-press department with two new Fujifilm Luxel T-9800 CTPs and two 125 ZAC processors. Both lines produce printing plates for the company’s Roland 705 (five printing units, plate format 1030 mm x 780 mm) and Heidelberg XL105 (ten printing units, plate format 1055 mm x 811 mm) presses.
The fully-automated mechanical plate-processing line, provided by BEIL, takes over the plates at the output of the two processors. The first line elements are two corner-transfer units that change the direction of the plates by 90° before the plates are combined – clash-free – on a single processing line. “The biggest challenge“, says BEIL’s head of engineering Christoph Thielmann, „was to squeeze the equipment into the existing room.“

On the conveyors, the plates travel to an in-line bending automate. This unit only bends the plates for the XL105 according to the press manufacturer’s specifications; the plates for the Roland press remain unbent. A barcode on every plate, gerated by the workflow-system, informs the BEIL-PLC whether a plate is to be bent or not. The corresponding barcode reader is mounted on the in-line bender.

Once the plates leave the in-line bender, a turning-table changes their direction again because of the limited space available. Additionally, the turning-table takes care that the XL 105 plates are always stacked with the bent edge down. The last stages of the plate-processing line are two double-sided stackers, providing a total of four stacking positions. Each position is made by a plate trolley, accepting a maximum of 80 plates each. Surveillance electronics makes sure that the trolleys are exactly at the right position – and that the stackers do not output any plates at positions where a trolley is missing.

All stackers are equipped with lateral displacement, making it very easy for the operators to distinguish several jobs, stacked at the same position: The plates of the subsequent job are not stacked flush with the preceding job – but with a lateral displacement of approx. 50 mm.

The installation at Control Media is designed for totally unattended operation at a production speed of approx. 80 plates per hour (pph). However, the mechanical plate processing line is capable of handling far more than 100 pph and thus protects the company’s investment, should they decide to upgrade the CTPs at a later state.

Profile: Control Media BVBA
After many years as an employed manager in the printing industry, Johan van Nunen decided to use his expertise as the seed capital of his own business in 1992. Only four years later, he already owned a print shop somewhere in the Dutch/Belgian border area. Shortly afterwards, his son Leon came on board the rapidly growing company that had just taken over a print shop in Belgium. In 1998, the company moved to Kapellen (near Antwerp, Belgium) until it reached its capacity limits there in 2007. Again, VNV Media Printing BVBA – as the company was called then – relocated, this time to Wildert, just a few kilometres off the previous location. 2010 saw the change of the name to Control Media BVBA. Today, the company prints seven days a week in a three-shift system, while post-press is on a two-shift system.
Control Media BVBA employs some 50 people in pre-press, press and post-press and successfully fights the high market pressure on print shops with unapologetic specialisation. All its processes are optimised to address the demands of a specific market segment. Main products are brochures, magazines and catalogues in small to medium-sized print lengths. Therefore, post-press does not only mean binding to Control Media, but also addressing, enveloping and dispatch.

The headquarters of the privately held company is based in the Southern Bavarian town of Abensberg, some 100 kilometers North-East of Munich. At its 6,500 square meters factory, the company has more than 70 state-of-the-art production machines and machining centers at its disposal. The medium-sized enterprise exports some 90% of its products to more than 185 countries.