Beak information management system for the Geological Survey of Tanzania 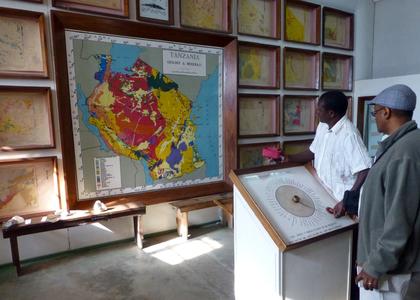 (PresseBox) ( Freiberg/Dar Es Salaam, 13-04-16 )
On 16th April 2013, the Ministry of Energy and Minerals of the United Republic of Tanzania and Beak Consultants GmbH, Freiberg, signed a contract for the design, development and implementation of the "Geoscientific Data and Information Management Systems" (GMIS) at the Geological Survey of Tanzania (GST) in Dodoma. The GMIS will contribute significantly to sustainable development of the national mining sector and its integration into national development planning. Tanzania has significant natural resources, such as coal, base metals, diamonds, precious and semi-precious stones. Tanzania is one of the fastest growing gold producers in Africa.
Within the coming year, the information system will be built and filled with data. Based on the digital database that will be available by then and based on the results of new field work, a comprehensive evaluation of the raw material prospectivity of the country for different commodities will be conducted. In this regards, Beak’s own advangeo® Prediction Software 2.0 will play a key role by using methods of artificial neural networks and GIS. Finally, the obtained findings will be presented in a newly created Metallogenic Map for the 0.9 million km ² large East African country.
In addition, a major component of the project is an extensive training program for the scientific and technical personnel of GST, in which the Bergakademie Freiberg, the Mining Authority of Saxony, and the Geological Surveys of Saxony, the Federal Republic of Germany, and several European countries will be involved.

Beak Consultants GmbH provides consulting services in the fields of geology, minerals, project due diligence, nature and soil protection, remediation of contaminated sites, planning, development and implementation of information systems, as well as data capture/cartography/GIS in Germany and abroad.
Currently, Beak employs 39 professionals from the fields of geo-sciences, computer sciences, cartography and mathematics.

Die Nutzung intelligenter Algorithmen im Tagesgeschäft nimmt gerade erst Fahrt auf. Oft erweiset sich die Integration in die Kerngeschäftsprozesse als knifflig. Dieser Herausforderung begegnet die Ergo-Versicherungsgruppe mit einer AI Factory. read more
The publisher indicated in each case is solely responsible for the press releases above, the event or job offer displayed, and the image and sound material used (see company info when clicking on image/message title or company info right column). As a rule, the publisher is also the author of the press releases and the attached image, sound and information material.
The use of information published here for personal information and editorial processing is generally free of charge. Please clarify any copyright issues with the stated publisher before further use. In the event of publication, please send a specimen copy to service@pressebox.de.