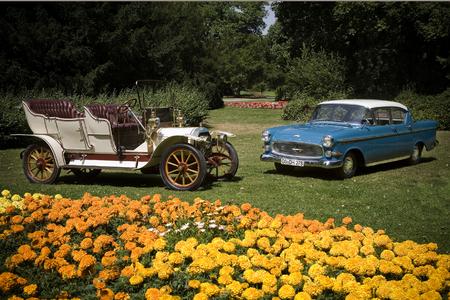 (PresseBox) ( Münster / Rüsselsheim / Darmstadt, 08-08-04 )
Three strong partners have made it possible: On Saturday September 6, 2008, two pieces of automotive history will be on show at BASF Coatings in Münster. For the plant's Open Day, Opel Classics, BASF SE and BASF Coatings are presenting two milestones in the history of the car, an Opel Motorwagen from the year 1908 and an Opel Kapitän from the year 1958. Both vintage cars have been restored and repainted. Even before their guest appearance in Münster, the two cars will first be on show at the "Oldtimer Grand Prix" to be held at the Nürburgring (August 8 to 10).

Both 4-wheel vintage models were deliberately chosen because their years of manufacture correspond to landmark anniversary years that are being celebrated in 2008 by the Glasurit paint brand of BASF Coatings. Just as the two car models are 100 and 50 years old respectively this year, Glasurit is also celebrating three special anniversaries. In 1888 Max Winkelmann established a company to sell coatings and colorants. Ten years later, in 1898, Max Winkelmann decided to market all the products under the name "Glasurit". Finally, in 1908, the firm was converted into a joint-stock company ("Aktiengesellschaft"). The plant in Münster-Hiltrup was opened in 1903.

Both vehicles were painted at the paintshop of Glasurit customer Georg Büttner in Darmstadt. Both vintage cars arrived at the paintshop dismantled in individual parts and had to be carefully and progressively painted. The work has continued over several weeks, since the original colors had all been applied.

Paintshop owner Georg Büttner, himself a genuine fan of vintage automobiles, one thing was happy: "Is is wonderful to be ready in time for the two big events".

Panoramic windows, tail fins and two-color paintwork were the hallmarks of the cars of the late fifties. In keeping with these lines, the Kapitän 1958 had a lean, modern look, with a slightly sloping roof. The luxuriously chrome-plated front end and the sweeping, eye-catching bumper follow the lines of the fenders. Wraparound panoramic windows integrate the roof structure harmoniously into the overall design. Chrome trims divide the side panels, which flow naturally into the rounded tail fins. The rear lights are arranged in the characteristic shape of a keyhole embedded in the ends of the tail fins. This feature in fact also gave the 4.70-meter long Opel top model its nickname - it was rapidly dubbed the "Keyhole" Kapitän.

The Opel 10/18 hp double-phaeton, which has also now been freshly restored, was presented in glowing words at its market launch in 1908:

"Proceeding from the principle that only the best is good enough, Opel Werke this season is putting a small 4-cylinder model on the market, taking fully into account the demand of the public for this type of vehicle and being sure to satisfy the most extensive requirements," read the brochure of the time for this motor vehicle that was priced at 8,500 Deutschmark. The features that were particularly emphasized were its "usability as both town and touring car, absolute operating safety, light weight and consequent extremely low tire wear, minimal gas and oil consumption, simplest conceivable mechanism with resulting ease of use even without a chauffeur, speed of up to 60 km/h, gearshift guide channel, magneto ignition, precision workmanship and top-class materials".

The 10/18 hp Motorwagen was particularly successful in motor sports. For example, in 1909 it won first and second place at the then renowned "East German Königsberg - Zoppot Touring Rally" and won second prize at the speed race organized by the Automobile Club of Argentina. It also won the 1025-km long international "Test drive for light cars - Vienna - Triest - Klagenfurt - Vienna".

In the same year, the 10/20-hp model, which was of identical design but with 2 hp extra power, won first, third and fifth places in the most important race of the year, the roughly 2000-km long "International Prinz Heinrich Touring Rally" and received the top prize from the Imperial Automobile Club.