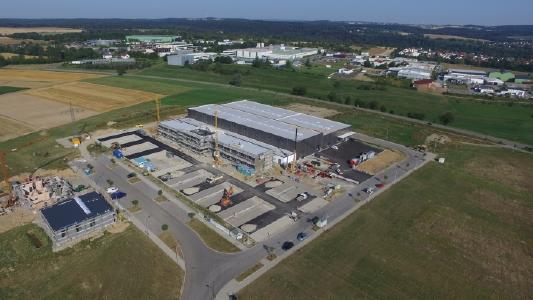 (PresseBox) ( Sulz a.N. - Renfrizhausen, 19-10-09 )
Despite difficult market conditions, Automatic-Systeme Dreher GmbH maintained the already good level of the previous year and again achieved a positive operating result for the 2018–19 financial year. The company realised a total of 33.3 million euros in new orders. At the same time, the order backlog at the end of September 2019 will reach an all-time high of around 45 million euros.

DREHER Automation had already achieved a significant increase in sales in the previous financial year. This year, the supplier of automation solutions anticipates a slight increase in sales to 30.5 million euros and a further improvement in both earnings and operating profit.

Managing Partner Hasan Sarac is very confident about the new 2019–20 financial year, which began on 1 October 2019. With its comfortable backlog of orders, the company currently has a production workload of around one and a half years.

Several major press retrofitting projects with European car manufacturers made a significant contribution to the operating result. The total value of these major projects amounts to almost 14 million euros. The comprehensive systems expertise DREHER Automation provides was highly valued in the awarding of the contract, and thus the company was able to stand up against well-known competitors and win the project for itself.

The positive economic performance in the past financial year also brought benefits for the employees of DREHER Automation: since 1 July 2019, they have enjoyed a three-percent salary increase. The company currently has 186 employees. Of these, 28 are young people on apprenticeships. With a current apprenticeship ratio of just under 18 percent, DREHER Automation is well above the industry and sector averages. In contrast to the personnel policy many large companies are currently pursuing, DREHER Automation continues to hire skilled employees in the area of future technologies.

However, DREHER Automation has responded to the brisk market demand in recent years not only with an increase in salary for its employees, but also with a new building on a greenfield site. The new facility will enable current capacities to be doubled from 1 January 2020 and is virtually ready for occupancy. Unlike other major construction projects, the company’s relocation at the start of the year is on schedule. Despite a significant increase on the balance sheet as a result of the new building, the equity ratio is expected to remain at a comfortable 40 to 45 percent.

As experts in automation solutions for forming processes, DREHER Automation will again be attending this year’s Blechexpo in Stuttgart. The international trade fair for sheet metal processing will take place from 5 to 8 November. You will find Automatic-Systeme Dreher GmbH in hall 8, booth 8101.

Further information is available from www.dreher.de.

By retrofitting a stamping press, DREHER Automation demonstrates that purchasing a new forming press is not always necessary