Twickenham Stadium (UK), now the largest Rugby Stadium in the world, has completed its revamp with the installation of new AURES' POSLIGNE® EPOS terminals 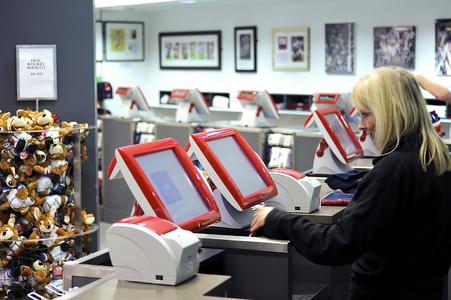 (PresseBox) ( Fürstenfeldbruck, 11-03-14 )
AURES Technologies, manufacturer of the POSLIGNE® range of EPOS systems and terminals, proudly announces that the Group has to date deployed over 50 EPOS in Twickenham Stadium, the Home of England Rugby and the Rugby Football Union (RFU).

Over the years, Twickenham has extended its seating capacity to a staggering 82,000 - making it the largest rugby stadium in the world; consequently, it needed a revamped EPOS installation to cope with the increasing number of visitors, fans and customers.

The rolled out POSLIGNE® systems consist in a mixture of Odyssé all-in-one terminals, Poséo Retail PCs and OLC 15 touch-screens; the equipment installed ensures that the stadium's continuous stream of clients and supporters enjoy a swift and efficient payment and ticketing service. This from the very first moment when they arrive in the many car parks, through to the crowded refreshment, fast food and take away areas.

Also equipped with POSLIGNE® terminals are the retail stores and outdoor kiosks located in the various parking areas surrounding the stadium - housing the Odyssé EPOS integrated terminals - enabling customers to buy their tickets.

Mr Andy WARD, RFU Head of Retail at Twickenham Stadium, commented: "AURES POSLIGNE's management and till systems - with their unique 'Clip'n Color' system - offer the RFU an effective POS solution; they perfectly match the colours and branding of Twickenham and England Rugby, allowing us to further enhance the brand identity and values of our team and stadium".

Mr Dean CHALLINOR, Head of the AURES Group in the United Kingdom, added: "indeed, the pearl white colour of our hardware combined with the carmine red clips are a perfect match for Twickenham - and we are proud to be part of it!

This deployment in the UK confirms our ability to establish a foothold in the greatest European Stadiums, following installations in Germany Tivoli Aachen (over 110 Odyssé EPOS installed), Dresden (75 Odyssé), Gelsenkirchen Arena AufShalke (240 POSLIGNE modular systems in operation), München (50 Galéo systems) and last but not least, Le Mans Stadium in France" he concluded.

The Rugby Football Union is the National Governing body for rugby union in England and supports participants and fans from the grassroots to the national team.

Founded in 1989 and listed on Euronext Paris since 1999, the AURES Group manufactures point-of-sale terminals and systems as well as related peripherals, which it markets under the POSLIGNE® brand.

Acclaimed for its reliability and performance, this PC-based, open-system hardware is designed to provide management and till functions in specialist food and non-food stores, mass retail outlets, and the hotel and catering industry, as well as all other points of sale and service.

Offering hardware featuring innovative designs and a wide range of fully interchangeable colours, the AURES Group is positioned as the most creative leader in its field.

Distribution of POSLIGNE® systems is based out of AURES' headquarters in France, the Group's three subsidiaries in the United Kingdom, Germany and the USA, and a distributor network present in over forty countries.