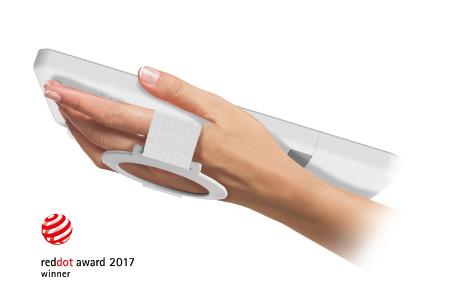 Developed by AURES in collaboration with Bertrand Médas – designer and CEO/founder of ID’S design agency – the SWING is a mobile, multi-function EPOS system designed to meet the needs of omni-channel, mobile point-of-sale and service environments.

The SWING has a wide range of features for EPOS management and payment receipt, order processing, digital display, menu and production presentation, price checking, and to manage stock as well as on- and offline customer loyalty programmes.

“The RED DOT award’s panel of judges was taken with the modular, ergonomic design of our new multi-use tablet concept,” explained Patrick Cathala, CEO and founder of the AURES Group.

“The POGO system – a connection and magnetic attachment module featuring built-in, retractable security locks – is unique on the EPOS market. This exclusively developed AURES device enables the tablet to auto-position on its various stands: in addition to the mobile (tablet on the user’s forearm) and stand-based (tablet attached to a built-in, foldable stand) versions, the SWING can easily be turned into a complete, compact mini-EPOS system (docking station version), or used in mini-pole and wall-mounted versions.” The SWING is splash-, dust-, jolt-, and drop-resistant and is suitable for tough EPOS environments.

“With this latest RED DOT award, we have proved once again that the AURES Group is the most creative, innovative designer on the EPOS market,” said Cathala.

The SWING various versions:
The shell – made from a resistant thermoplastic polyurethane (between rubber and plastic ) – is ultra-soft to the touch, making it very comfortable to use and highly drop resistant.
With the exclusive POGO system (optional extra):
On 5 March 2017, AURES’ SWING system also won the TOP Produkt Handel 2017 competition (in the ‘PoS-Effizienz’ section). This annual innovation prize was awarded at the EuroShop trade show in Düsseldorf, Germany.

About the RED DOT Design Awards

The award-winning products and projects are published in the RED DOT Design Yearbook.

The RED DOT Design Museums in Hamburg and Singapore are world-famous for their outstanding exhibitions.

Founded in 1989 and listed on Euronext since 1999, the AURES Group manufactures EPOS systems and related peripherals. This PC-based hardware and open-system equipment provides management and till functions to all points-of-sale and points-of-service, including specialist food and non-food stores, retail outlets, superstores and catering and hospitality.

With corporate sales of €76.2 million for 2016, AURES has global presence, with its head office in France, subsidiaries in the UK, Germany, Australia and the USA - and a network of distributors and resellers in 50+ countries.

In 2016, the Group received the BFM Award of the Export Performance of the year.

Complementary to the POS activities of the Group, the OEM "Equipment & Systems Department" works closely with systems integrators and suppliers, providing them with complete product lines of hardware elements and sub-equipment for industrial, kiosk and digital display applications.