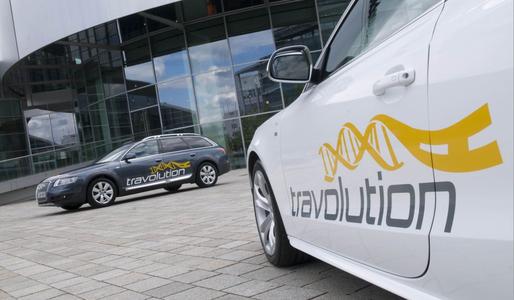 A wave of "green" is washing over Ingolstadt: after two years of research, the "Travolution" team has developed a trend-setting concept to improve traffic infrastructure. Investment amounts to a total of about €1.2 million. AUDI AG and its venture partners presented the results today, with further joint pilot projects to follow.

"Travolution blazes the trail for innovative traffic management of a magnitude unique in Germany. The result is a functioning prototype for the traffic control of the future," said Dr. Werner Widuckel, Audi Board Member for Human Resources. Aside from Audi, participants include the city of Ingolstadt's Office for Traffic Management and Geoinformation, the Professorial Chair for Traffic Engineering at the Technical University of Munich, and GEVAS software GmbH.

The system that was presented today is used at 46 traffic lights in the municipal area of Ingolstadt. In this process, software optimizes the entire network of traffic lights, significantly reducing the duration of stopping times for cars.

An additional part of the project is called "The informed driver." For this, three traffic lights have been equipped with communications modules that send the time for the next green phase to the car's on-board computer. Audi has made an Audi A5 and an A6 Avant available as test vehicles for this part of the project. The drivers of these cars are informed through the Audi MMI infotainment system at what speed they should travel in order to drive through the intersection without having to stop.

"The car thus becomes a component of the networked world," said Michael Dick, Audi Board Member for Technical Development. "The successful completion of this project shows that Audi recognized early on what is needed to deal with developments in traffic, and has set a course for it." Travolution optimizes the flow of traffic, which results in lower fuel consumption - and offers relief to local residents.

Additional follow-on projects based on Travolution are to be initiated. The field for research in Ingolstadt is to be expanded by another 20 cars and 50 traffic light installations. In addition, up-to-the-minute traffic information for the city will keep drivers better informed.

The Travolution project is supported by the Bavarian Ministry of Economic Affairs as part of Bavaria's "Information and Communications Technology" R&D program.

"The new approaches to modeling and optimization in the network-wide control of traffic lights, together with communication between traffic lights and intelligent cars, exploits a potential for improving traffic flows that has previously gone untapped. The evolutionary GALOP optimization method that was largely developed at the Technical University of Munich has significantly reduced stopping due to traffic lights, while also minimizing traffic-related pollution."

"GEVAS helped initiate the Travolution research project in order to promote traffic-adaptive network control in the urban infrastructure of the future. We also wanted to prove that evolutionary software techniques can significantly improve traffic quality for an entire city. We've achieved both objectives. As system integrator, GEVAS software was also responsible for expanding the new traffic computer. The results of Travolution bring traffic technology a step further in Germany, where the automotive industry is so important."