Over 1,000,000 engines produced in the first six months of the year for the first time 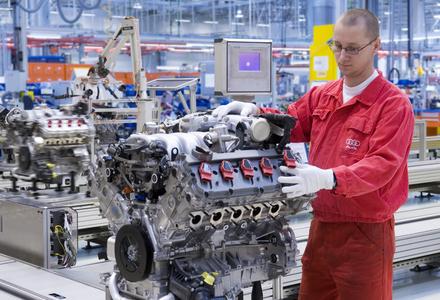 (PresseBox) ( Ingolstadt, 07-08-14 )
.
- Upward trend in engine production
- Sharp increase in vehicle production
- Preparations for the new Audi A3 Cabriolet are in full swing
- Key financial figures up once again

AUDI HUNGARIA MOTOR Kft. has set another engine production record during the first half of 2007: the company has already exceeded the one million mark in the first six months of the year. 1,013,697 (994,777)* engines were produced in Gyõr by the end of June, 1.9% more than in the same period last year. There was also a significant increase in the production of the Audi TT and TT Roadster sports cars during the first half of the year. 32,089 (5,194) vehicles left the factory floor.

Audi Hungaria generated revenue of around EUR 3.14** billion (EUR 2.45 billion) during the first half of 2007. Of the total capital investments of EUR 300 million planned to be made by the end of 2007, around EUR 130 million was invested between January and June 2007.The total capital investments from the year in which the company was founded in 1993, to the end of June 2007 have thus increased to EUR 3.18 billion. **

“The key financial figures were up once again during the first half of 2007. This means that we are on the right track and will have another excellent year,” said Dr Johannes Roscheck, Director of Finance at Audi Hungaria.
The new Audi A3 Cabriolet will be assembled at AUDI HUNGARIA MOTOR Kft. in Gyõr in the future. This was confirmed by Rupert Stadler, Chairman of the Board of Management at AUDI AG, in the presence of the Hungarian Prime Minister Ferenc Gyurcsány at the Parliament in Budapest at the end of June.

“Audi Hungaria is not only growing in terms of quantity, but also in terms of quality. The impressive figures reaffirm our commitment to continuously improve production processes and structures. This is the ideal basis on which to launch the production of the new Audi A3 Cabriolet and the expansion of the engine range. The preparations for the A3 Cabriolet are already in full swing”, said Thomas Faustmann, Chairman of the Board of Management at Audi Hungaria.

The number of employees at AUDI HUNGARIA MOTOR Kft. rose in recent months thus increasing the number of highly qualified staff. It had 5,498 (5,158) employees as at the end of June 2007, an increase of 6.6 percent.

Recommend Over 1,000,000 engines produced in the first six months of the year for the first time press release