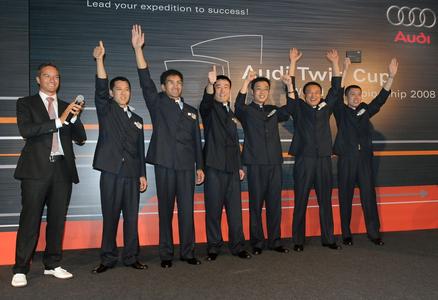 A multi-national final held in 25 languages: 60 Audi teams from 36 nations travelled to the Formula 1 circuit in Istanbul from June 5 to 7 to crown a world champion from their ranks. Their goal, however, was not to win a car race - even though the teams are all top experts in the automotive world. AUDI AG had invited its dealers' best service teams worldwide to put their knowledge and skills to the test in an international competition.

The participating teams, made up of service and technical staff, were already all winners in their own right before the start of the final. In the preceding national competitions, they had won against the competition from other dealerships in challenging theory and practical tests. Now they were called upon to apply their specialized knowledge in the grand international final, the Audi Twin Cup, in Istanbul.

In the Audi Twin Cup, the teams have to convince the jury of their abilities in typical work situations, such as a simulated customer dialog or the expert mechanical repair of an Audi A6. Teams have to complete two tasks in their particular specialized field (service or technical) plus a joint exercise to test their customer-oriented behavior.

More than 9,000 service technicians and advisers worldwide take part in the Audi Twin Cup. As well as spurring motivation in a sporty way, the competition is aimed at constantly improving the quality of service provided by staff at Audi dealerships. "The great interest in the competition says much about the success of our motivational and training programs relating to Audi top service. By this we mean consistent customer orientation, an exclusive overall performance by the Audi dealer and first-class service and repair quality," says Bernd Hoffmann, Head of After Sales and Genuine Parts at AUDI AG.

Away from the competition itself, the accompanying program around the Formula 1 track in Istanbul put the teams in excellent spirits, with fast test drives on the winding circuit and a lengthy talk with current DTM leader and Audi top service ambassador Timo Scheider. Any language barriers were finally overcome during a festive dinner, bringing all of the approximate 400 guests together.

The Audi Twin Cup was first held in 1996 and, including the national competitions, runs on for about six months. All Audi dealerships who have a service contract with AUDI AG are eligible to take part. The best national teams qualify for the international Audi Twin Cup practical final. This year saw teams from Belgium and Bosnia taking part for the first time.