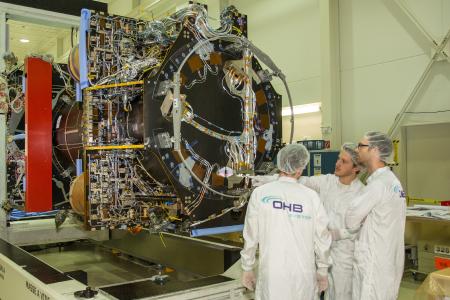 (PresseBox) ( Hannover, 16-06-14 )
OHB System AG, one of the three leading aerospace companies in Europe, has opted for the support of the Hanover-based provider Aucotec in designing its satellite wiring harnesses. The Engineering Base (EB) software is the perfect platform for defining and calculating all electrical system connections in a centralized manner according to OHB.

Andreas Lindenthal, Management Board member of OHB System AG, said: "We need absolutely reliable and consistent data at all times for each user. The new system, which we use exclusively in the entire harness area, is ideally equipped to meet this need with its central database."

All wiring harness details of a satellite project, whether airworthy or test cable, are stored in EB's data model. In multi-user mode, it is possible to work at various points in the process in the same project; users see their colleagues' results immediately, regardless of where they work. This avoids discussions, multiple entries and errors.

"The fact that Engineering Base has won over such an innovative and successful company confirms that our product development is on the right track and shows the versatility of the system," said Management Board member of Aucotec Markus Bochynek about the OHB decision. "We are basically a "down-to-earth" company, but through the cooperation with OHB, we are still reaching slightly for the stars."

Mass data – an everyday challenge with 15,000-20,000 pin-to-pin connections to several 100-pin connectors per satellite – can be easily managed using purely alphanumerical editable Excel-like spreadsheets. The results are immediately displayed automatically in the corresponding graphics also. According to OHB, EB is characterised as much by automated test runs as well as easy exchange with subcontractors or downstream applications, for example, 3D and PLM, as by the Windows-like approach, which makes the system easy to learn.

Initial projects have already been implemented at the two OHB sites in Bremen and Munich. Aucotec very competently assisted in the adaptation of EB to specific OHB requirements for these projects. Even wider use of the platform is planned for the years ahead according to Andreas Lindenthal. Furthermore, there is already a plan to harmonize the engineering processes of OHB and the company which was integrated some time ago, Kayser Threde.

OHB System AG is one of the three leading aerospace companies in Europe. The system provider belongs to the listed high-tech group OHB SE, in which around 2000 specialists and executives work in Central European space programmes. OHB is specialized in high-tech solutions for aerospace, science and industry with its sites in Bremen and Oberpfaffenhofen and more than three decades of experience. Low earth orbit and geostationary satellites constitute its core business. The Galileo navigation satellites, weather, environmental and telecommunications satellites are, among other things, as much part of its portfolio as the collaboration with the International Space Station (ISS).

Aucotec AG develops engineering software for the complete life cycle of machines, plants and mobile systems - with more than 30 years of experience. Solutions range from flow diagrams via process control and electrical engineering for large-scale plants to harness design in the transportation industry. Aucotec software systems are in use worldwide. Aucotec, with headquarters and main development center in Hanover (Germany), is represented in all major markets like USA, China, South Korea, UK, France, Italy, Poland, Sweden and Austria. A global network of dedicated partners ensures local support worldwide.of partners ensures local support throughout the world.