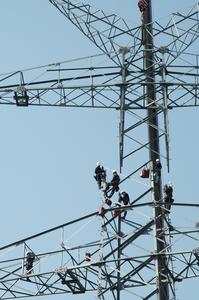 (PresseBox) ( Hannover, 15-06-01 )
With TenneT TSO GmbH, the Hanover-based engineering system house Aucotec has gained one of the leading electricity transmission system operators in Europe as a customer for its software platform Engineering Base (EB). The power supply company expects this decision to lead to significantly more efficiency in terms of its engineering through the database-driven nature of the software and the related considerably higher degree of standardization of its data. Aucotec is assisting the migration through the regular exchange of information, by supporting data transfers and developing further additions. Their goal is to cover the complete workflow, thus ensuring seamless consistency.

Change in energy policy exerts pressure
The change in energy policy will involve massive investments in the grids. TenneT is banking on EB's database-driven, object-oriented concept in order to be able to handle the greatly increasing project volumes with existing resources within today's very tight time frames. Their choice was also reinforced by the fact that some of TenneT's suppliers already use EB for documentation purposes.

With the migration, transmission system operators can rely on the fact that the proven capabilities of the previously used tool that was established almost consistently within the energy supply sector, Ruplan EVU, will still be available also. Since Aucotec is the developer in both cases, the company's decades of experience were incorporated in EB. With its three-layer client/server architecture and its integrated standard components SQL Server, Visio, VBA and .NET, however, Engineering Base can also do so much more.

Reducing typicals, saving time
In a pilot project, TenneT was able to reduce the number of project templates and typicals by about two-thirds using optimized variant management. The standardization and reduction in master data maintenance succeeded in shortening the planning time alone by around 20%. However, the transmission system operators are assuming there is further potential to be tapped.

The company has been active for many years in the utilities working group (“EVU-Arbeitskreis”) led by Aucotec. There, the participants have been able to contribute to the development of the new system. Thus the electricity supplier now sees the migration as a logical step. Although not all existing projects will be migrated, Engineering Base will be used for everything that is replaced.

Upon announcing the decision, Aucotec Executive Officer Markus Bochynek says: "TenneT is very important to us as a partner. We have known each other for a long time and we are now particularly pleased that we have won over this future-oriented company, which is a pioneer in the improved supply of renewable energies, with the modern concept of our platform."

TenneT TSO GmbH is active in the Netherlands and Germany as one of the leading transmission system operators for electricity in Europe. TenneT supplies electricity internationally to 41 million end users around the clock from its high-voltage grid. With its roughly 21,000 kilometres of high-voltage power lines, TenneT ranks among the top 5 transmission system operators in Europe. The goal of its global cooperation with governments, NGOs, trade partners and investors is the expansion as well as the operation and management of important high-voltage infrastructures. These include onshore and offshore networks as well as international interconnectors.

Aucotec AG has over 30 years of experience in developing engineering software for the entire life cycle of machines, plants and mobile systems. The solutions range from flow diagrams through control and electrical engineering for large-scale plants to modular harness design in the automotive industry. Aucotec software is in use all over the world. In addition to its headquarters in Hanover, Aucotec AG operates six further sites in Germany as well as subsidiaries in China, France, the United Kingdom, Italy, Austria, Poland, Sweden and the US. A global network of partners ensures local support throughout the world.