ASUS Continues to Bring Choice through Innovation at Computex 2011 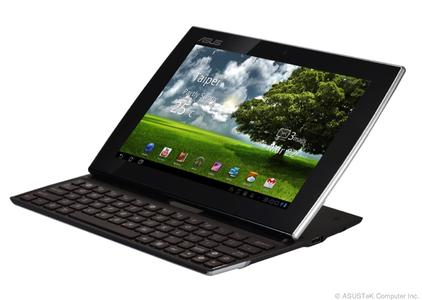 ASUS recognizes that no single device can possibly meet the needs of all mobile users, which is why four different tablets will be available by the end of 2011.

Tablet users who want a compact device for both creating and consuming content are perfectly served by two ASUS tablets announced earlier this year - the Eee Pad Transformer TF101 and Eee Pad Slider SL101. A winner of a Computex 2011 "Best Choice and "Best Design" awards, the Transformer is a more traditional take on the tablet, with the Android 3.0[1] 'Honeycomb' operating system and a widescreen 10.1-inch IPS multi-touch display. When docked to the optional Eee Station, however, it transforms into a compact ultraportable with a QWERTY keyboard and up to 16 hours battery life[2].

The Transformer will soon support Android 3.1 - the latest Honeycomb version - so owners will soon be able to enjoy additional features and enhancements after receiving an over-the-air software update on May 31 This worldwide FOTA update will deliver significant improvements to the Transformer user experience. Android 3.1 will be a major step forward for Android-based tablets and ASUS is proud to be a market leader continues to lead the market when it comes to delivering the very best to consumers.

The Slider, on the other hand, is an Android 3 tablet that packs a QWERTY keyboard beneath its hinged 10.1-inch multi-touch display to offer the best of both mobile worlds.

For mobile users who value portability above all else, the new Eee Pad MeMO 3D delivers in spades. This Android 3 tablet has a 7-inch multi-touch screen that can also be used with the supplied stylus and custom applications to make it the perfect on-the-go productivity tool. The bundled MeMIC hands-free headset makes it ideal for listening to music and making calls as well. Flip the MeMO 3D into landscape orientation and it becomes a glasses-free 3D display that adds a new dimension to mobile entertainment. Launched earlier this year, the Eee Slate EP121 12.1-inch tablet is already selling extremely well in the US and Europe. Powered by an Intel® Core(TM) i5 processor and Microsoft® Windows® 7 Home Premium, the Eee Slate is the most capable tablet currently available.

ASUS also continues to innovate with its phenomenally popular range of Eee PC netbooks and new models for 2011, bringing even wider choice for mobile users. The new Eee PC X101 is designed be the perfect ultraportable for modern mobile users. Its Intel® MeeGo operating system incorporates full support for a wide range of social networking services, while the wing-shaped design is just 17.6mm thin and weighs a mere 950g.

The Eee PC X101 is joined by the Eee PC X101H, which runs on either the MeeGo or Windows® 7 Starter OS. ASUS Instant On technology means the Eee PC X101H can resume a saved session in just two seconds from standby mode³. It is available in a wide range of stylish colors too, making it the perfect accessory for travelers who need to stay connected.

The ASUS Eee PC 1025 series takes netbook performance to new levels with the latest Intel® Atom(TM) processor. ASUS Instant On technology means it is always ready to go, resuming a saved session in just two seconds and lasting two weeks while on standby mode. HDMI output provides big-screen HD video playback and a web cam with 4x zoom is perfect for video chats with friends and family. Available in a variety of expressive colors, the Eee PC 1025 Series has a sleek metallic finish and silver lining to accent any personal style, whether on the road, in the office or at home.

Winner of the Computex "Best Choice" and "Best Design" awards, the Eee Pad Transformer TF101 is a slim and stylish tablet with a 10.1inch screen made from super tough Corning® Gorilla® glass. The wide 178° viewing angle of the IPS screen and widescreen HD resolution make the Transformer perfect for consuming content, while the Android 3 'Honeycomb' operating system brings new levels of productivity, too. The trick up the Transformer's sleeve, however, is the optional Eee Station dock. Designed to complement the Transformer perfectly in size and finish, the Eee Station packs both a large QWERTY keyboard and an extended battery. So, with the Transformer locked in place, it becomes a capable but compact ultraportable that can last for up to 16 hours* on combined battery power.

The Eee Pad Slider is a tablet computer for mobile users who need constant access to a physical QWERTY keyboard, but who don't want to carry a separate accessory. The Slider has the same hardware specification as the Eee Pad Transformer, including NVIDIA® Tegra(TM) 2 dual-core processor, plus the same Android 3 'Honeycomb' operating system. The difference, however, is that its 10.1-inch IPS screen is mounted on a clever hinged mechanism that lets it tilt upwards and back to reveal a compact QWERTY keyboard tucked away beneath for the perfect combination of portability and flexibility.

The Eee Pad MeMO 3D is designed to be an alternative take on the 10-inch tablet that is fast becoming a standard size. This portrait-orientated device has a 7-inch multi-touch screen that can be used in the usual way with Android 3 'Honeycomb' applications, but there's also the added function of a stylus support, which means users can switch to handwriting input and treat the MeMO 3D much like a digital notepad. The bundled MeMIC Bluetooth headset makes it ideal for listening to music and making calls too, but flip the MeMO 3D into landscape orientation and it becomes a glasses-free 3D display that adds a new dimension to mobile entertainment.

Windows® 7 Home Premium ensures full compatibility with a wide range of popular applications, while the capacitive IPS touch-screen with 1280 x 800 resolution and ultra-wide 178° viewing angle offers two input options - fingertip control for general use and the supplied stylus for when greater precision is required. Available with SSD storage capacities up to 64GB, the Eee Slate EP121 also has onboard 802.11n Wi-Fi and Bluetooth 3.0 for fast wireless connectivity, plus a 2-megapixel webcam and mini-HDMI port. An on-screen keyboard is also complemented by support for an external Bluetooth keyboard for traditional desktop use.

The Eee Slate EP121 was one of it's the eight ASUS products to be selected for a CES 2011 Innovations Award.

Available with a superfast solid-state hard drive, the ASUS Eee PC X101 is a new netbook that is designed to perfectly meet the needs of the modern mobile user who lives and works online. Just 17.6mm thick and weighing less than 950g, the Eee PC X101 can be slipped into a bag and taken anywhere, but this is no cut-down portable computer - it packs a 10.1-inch screen, QWERTY keyboard and the latest Intel® Atom(TM) N435 processor.

Get online with 802.11b/g/n Wi-Fi and the Eee PC X101 really comes into its own. The Intel® MeeGo operating system has full support for a wide range of social networking services and a raft of productivity tools built in, making this a netbook that is ready for use out of the box. For more choice, there is also the X101H, which runs on the MeeGo or Windows® 7 Starter OS on either a solid state of hard disk drive.

The Eee PC 1025 is a redesign of the successful Eee PC Seashell. Its streamlined design comes with an eye-catching metallic finish and features a 10.1-inch display, the Smart Camera with 4x zoom, along with the new dual core Intel® Atom(TM) processor that delivers enhanced performance. With an astonishing 14 hours of battery life on a full charge**, it fulfills its promise of all-day computing. The Instant On feature allows users to resume their Windows session in just two seconds, and can stay in standby mode for up to two weeks.

HDMI-compatibility allows for HD video playback and connectivity is ensured via Wi-Fi 802.11n and superfast Bluetooth 3.0. In addition, USB 3.0 provides data transfer speeds that are up to 10x faster than USB 2.0 standards***.

Please visit http://press.asus.com/... and www.techinstyle.tv for the latest ASUS Computex announcements and to get pictures of the products.

[1] An over-the-air upgrade to Android 3.1 is available for Transformers running on Android 3.0.
[2] Conducted under standardized test conditions.