Digitization of one of Germany’s oldest music collections 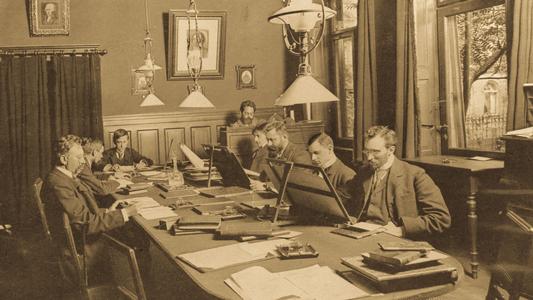 (PresseBox) ( Gütersloh, 15-08-17 )
Gütersloh, Germany -- Peters Music Library is considered an extraordinarily valuable collection and a symbol of Leipzig’s music, publishing, and library traditions. The superb, world-famous collection of manuscripts, first editions from important composers, scores, and books has been safely stored in the archives of the Leipzig City Library for many years. Now some of these documents and the history of the collection will be made accessible to a wider public audience in digital format.

Thanks to arvato Systems’ gift to mark the 1,000th birthday of the city of Leipzig, the history of the collection and the Hinrichsen family will be visually brought to life by presenting photos, documents, and digital copies of valuable works on a wide-screen display in the city library and online in a fun and interactive style. This will also include audio excerpts.

“We have selected and digitized the most important documents and photos of the 24,000 publications in the Peters Music Library,” says Susanne Metz, director of the Leipzig City Libraries, explaining the project. “Now arvato Systems has prepared all of the multimedia and designed the presentation for the wide-screen display and the website.”

For example, the presentation includes an excerpt from the guest book of the Peters Music Library. Numerous exponents from both the German and international music world, such as the composers Edvard Grieg, Johannes Brahms, Richard Strauss, and Gustav Mahler, have been immortalized in this collection since it was founded in January 1894.

The goal is to educate the residents of Leipzig and visitors to the city on the close ties between the city’s Jewish history and its music and publishing traditions by means of a multimedia presentation. “The young audience is especially important to us. We hope that this modern presentation format will allow us to reach out to school pupils as well. This will help us to fulfill the responsibility of carrying our cultural heritage into the future,” emphasizes Susanne Metz.

“The history of the Peters Music Library and the Hinrichsen family had a deep impact on me,” explains Matthias Moeller, CEO of arvato Systems perdata GmbH in Leipzig, Germany. “Citizens of Leipzig began collecting real treasures for the public over 100 years ago. More people should know about this, so it was an easy decision for us to implement this digitization project together with the Leipzig City Libraries. We are delighted to help with the visualization of these highly valuable documents and their unique history. We want to express our special connection to the town and location of Leipzig with this long-term project in honor of Leipzig’s 1,000th birthday.”

The presentation will be created in English and German. It will be available to view on a wide-screen display on the third floor of the city library at the end of this year, and it will also be published on the Leipzig City Libraries website. The gift is to be presented to the city of Leipzig at an official event in November.

We use the technology talent and expertise of over 3,000 people at more than 25 sites throughout the world. Being a part of the arvato network and belonging to Bertelsmann, we have the unique capability to create entire value chains. Our team creates integrated, future-proof business infrastructures that help make our customers more agile and competitive, and enable them to deliver new standards of service to their customers. We create streamlined digital processes that support innovative business models. Moreover we provide operation and support services.