By installing a solar module on the roof of the car, ANTARIS SOLAR enables a rally team to power lights and communication technology with solar energy. The rally with a humanitarian background, under the patronage of UNICEF, starts on 16th February. 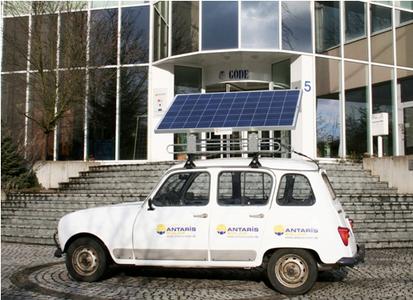 (PresseBox) ( Waldaschaff, 12-02-02 )
Driving a Renault 4 from Paris to Morocco for a good cause – That is the basic idea behind the 4L Trophy, a student car race similar to the Paris-Dakar rally. Around 1,500 rally teams will set off in their Renaults on the 16th of February for an adventurous 6,000 km trip through Spain, across the Strait of Gibraltar into the Sahara, and which finishes on the 26th of February in Marrakesh. The tour has had a humanitarian background since the very first Trophy in 1998. The project, which is under the patronage of UNICEF, aims to support Moroccan schoolchildren. Every rally team must carry at least 50 kg of school equipment – school bags, pens, copybooks, chalk. They also bring clothing, sports equipment, toys and non-perishable foods. In cooperation with the Moroccan organisation “Enfants du Désert” (Children of the Desert), these urgently needed items will be distributed locally in Morocco.

Mobile PV system from ANTARIS SOLAR as technical support
ANTARIS SOLAR is helping this year’s 4L Trophy with a special kind of sponsorship. The German photovoltaics supplier is providing a French rally team with a complete transportable photovoltaic (PV) system, which will be used to power and charge lighting and other technical equipment such as a laptop and mobile phone. A type AS P 230 ANTARIS SOLAR module was installed on the roof of the Renault 4 using a substructure. The hinged attachment is used to elevate the module, allowing it to be aligned with the sun. Spare tyres and other material can be stored underneath the module. A distribution box with a regulator is used to control the functions, display the battery capacity and incorporates the device connections. A leak-proof AGM battery is fitted inside the car to store the solar electricity generated.

ANTARIS SOLAR off-grid PV systems as role models
When installing the “rally-tough” PV system, robustness and ease of operation were priorities – properties which are also important for the flexibly configurable off-grid ANTARIS SOLAR photovoltaic systems.
Dr. Michael Goede, CEO of ANTARIS SOLAR, commented as follows on the sponsorship: “The ANTARIS SOLAR modules have proven very robust and heat-resistant in practice. That made them the obvious choice when equipping the rally team with our photovoltaic technology.”

The ANTARIS SOLAR Group (www.antaris-solar.com) is one of the leading providers of cutting edge solar technology in Germany and Europe. ANTARIS SOLAR combines wholesale services with large-scale turnkey projects – ranging from project development and planning to project implementation. The corporate group also operates Europe’s largest Web shop for photovoltaic products (www.fotovoltaikshop.net).
The headquarters of the ANTARIS SOLAR Group are located in Waldaschaff, near Aschaffenburg, Bavaria. In addition, the corporate group also has foreign subsidiaries in Switzerland, the Czech Republic, Italy, France and the UK.