ANTARIS SOLAR welcomes a delegation from the island nation of Vanuatu

Cooperation possibilities in the field of solar energy were discussed during the visit to ANTARIS SOLAR of a delegation from the island nation of Vanuatu. Vanuatu is at risk from a rise in the seal level caused by global warming. 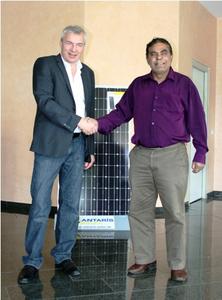 (PresseBox) ( Waldaschaff, 12-08-02 )
On Saturday 21 July, a delegation from the Republic of Vanuatu was welcomed to the Bavarian company headquarters of ANTARIS SOLAR. Vanuatu’s foreign minister, Mr. Alfred Rolland Carlot, his first secretary Mr. Matai Kaluatman and the ambassador Dr. Robert Sturm met with Dr. Michael Göde, the managing director of ANTARIS SOLAR to discuss cooperation possibilities. Due to the particular climatic conditions, solar power generation is a perfect solution for the islands, which are located around 2,500 kilometres east of Australia. However, there is another reason why solar power and renewable energies are of special significance to Vanuatu.

The islands of Vanuatu are at risk of disappearing under the sea
As a result of global warming, caused by high worldwide emissions of carbon dioxide, the polar ice caps and glaciers are melting, causing the sea level to rise. In consequence, some of Vanuatu’s islands which are situated only a little above sea level are at risk of being submerged. Estimates predict that the sea level could rise by between one and two metres by the year 2100. This would threaten the very existence of Vanuatu and other island states such as Tuvalu and Kiribati.

Demonstrating a commitment to a responsible relationship with the environment
“The hope of salvation for these islands lies exclusively in embracing renewable technologies such as solar energy in order to reduce harmful emissions of carbon dioxide, thereby counteracting a further rise in the sea level”, said Dr. Michael Göde.
Not only would cooperation between ANTARIS SOLAR and Vanuatu help to supply the island nation with renewable energy, “it would also be a symbol for care of the environment through the systematic use of ecologically sustainable forms of energy", declared Mr. Alfred Rolland Carlot, Vanuatu’s foreign minister.