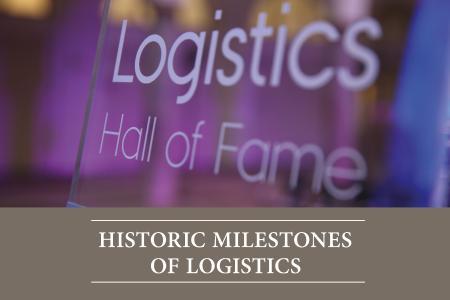 (PresseBox) ( Unterföhring near Munich, 16-09-28 )
.
- International expert jury honours "Historic Milestones of Logistics" between 1490 and the year 2000.
- Festive inductive ceremony on November 29 at the German Transport Ministry in Berlin.

The founders of the postal system paved the way for a new era of communication, the inventors of barcode and conveyor belt revolutionised industry, and the pioneers of parcel and express logistics laid the foundation for globalisation and eCommerce.

The motto for the 2016 voting period for the Logistics Hall of Fame was "Historic Milestones of Logistics" and in total, 13 big names from the field of transport, intralogistics, IT and insurance will be welcomed to the pantheon of the world's most famous logisticians this year.

"The new members complete the timeline of milestone achievements in logistics and illustrate how logistics has made life better and safer over the course of time", is how Anita Würmser, Executive Jury Chairperson of the Logistics Hall of Fame, explains the decision of the jury of international experts.

The first logistics milestone goes back to the year 1490 and is well known, too. The new inductees include Franz (*1459 †517) von Taxis (Tasso) and his nephew Johann Baptista (*1470 †541) von Taxis (Tasso). At the end of the 15th century, they created the first cross-border communication system, laying the foundation for the international postal system and the rise of the Thurn und Taxis family.

Henry Ford (*1863 †947), founder of the Ford Motor Company, and Ransom Eli Olds (*1864 †950), founder of Oldsmobile, will soon take their place among the ranks of the world's most famous logisticians for the invention of conveyor belt production. In 1903, Olds developed a simple form of "flow production", the so-called "progressive assembly line" for the Oldsmobile. Ten years later, Henry Ford introduced a system of automated conveyor belt production known as the "moving assembly line". It then took just 93 minutes to build a "Model T", and the car suddenly became affordable.

US entrepreneur James E. Casey (*1888 †1983) is joining the logistics pantheon as the inventor of parcel services. He founded the "American Messenger Company", later to become "United Parcel Service" – UPS for short – in Seattle in 1907 with a start-up capital of 100 dollars.

US Americans Norman Joseph Woodland (*1921 †2012), George Laurer (*1925) and Bernard Silver (*1925 †1963) are being honoured for the invention of the barcode. It was Woodland who originally had the idea for this kind of striped marking to label products. Together with Silver he developed the predecessor technology of the barcode in 1949 – which became a success when retailers and manufacturers in the United States agreed on the Universal Product Code (UPC) designed by IBM engineer George Laurer. On June 26, 1974 a checkout assistant scanned the first product bearing this barcode at a supermarket checkout in Ohio – it was a ten-pack of chewing gum. The barcode has revolutionised logistics, and automatic shipment tracking, modern warehousing practices and many other logistics innovations would have been unthinkable without it.

Freight forwarder and IRU President Lothar Raucamp (*1905 †1985) is being honoured as one of the most important advocates of the cooperative idea in logistics. When he set up Kravag in 1950 as a mutual insurance association, he secured the future of thousands of transport companies.

Gerhard Schäfer (*1924 †2015) is the only intralogistics expert to join the ranks of the world's most famous logisticians. The market launch and series production of the stackable "storage fix-box" developed jointly by the Schäfer brothers under the lead management of Gerhard Schäfer in 1953 is considered a milestone of intralogistics. The stackable boxes with a viewing hole at the front marked the beginning of modern storage container logistics and laid the foundation for the success story of the SSI Schäfer company.

Entrepreneur Horst Mosolf (*1928 †2015) will join the ranks of the pantheon members as a pioneer of vehicle logistics and inventor of specialised automotive transport. He was already setting new benchmarks in specialised automobile transports back in the 1950s and revolutionised the transport industry in this segment. Among other things, he commissioned the construction of the first double-decker wagon in 1959.

There is also a place in the logistics pantheon for Frederick W. Smith (*1944), founder and CEO of Fedex. He is considered the inventor of express services and of the goods hub in the field of air transport. According to an oft-repeated anecdote, he only founded the company in 1971 so that he could prove to his professors that it really was possible to reach any location in the world within the space of 24 hours.

Peer Witten (*1945) is being accepted into the logistics pantheon as a pioneer of Internet trading and modern logistics. As Logistics Director at the Otto Group, he not only built Hermes into a successful parcel distribution organisation from the mid-80s onwards but also initiated a whole series of innovations that set the trend in the market and subsequently served as a benchmark for Internet trading. Alongside the early introduction of virtual information and service platforms as well as environmental management systems in warehousing, these innovations above all included new delivery services, such as delivery on all workdays, 24-hour delivery service or freely selectable time windows.

The official induction ceremony takes place during a gala dinner at the Federal Transport Ministry – this year on November 29 in Berlin.

More information on all members: http://www.logisticshalloffame.net/...

Printable photos of all members: http://www.logisticshalloffame.net/...

Supporters of the Logistics Hall of Fame: