IFOY AWARD 2017: Still's automatic Liftrunner is the Special Vehicle of the Year 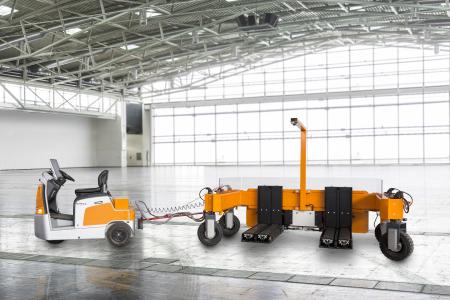 (PresseBox) ( Munich, 17-05-10 )
.
The IFOY Award 2017 in the category "Special Vehicle" goes to the tugger train with automatic loading and unloading from Still GmbH in Hamburg. The international jury selected the heavy-duty tugger train – purpose-designed to supply components to the production process on the site of an English construction machine manufacturer – as the best new product in the category of special vehicles.

The winner was a well-kept secret up to the last moment. Last Tuesday, the name was revealed at the IFOY Award Night at BMW World in Munich, when Birgit Heitzer, Director corporate logistics at Rewe Group, Cologne, presented the metal and glass trophy to the delighted recipients.

The key factor in the decision of the jury was the high level of customer benefit in combination with the new market potential. "The tugger train trailer with lateral ejector forks developed by Still as a customised solution is a practicable step towards the full automation of the production process. It extends the range of applications of tugger trains and therefore opens up a new market segment", in the words of the jury. The IFOY Test underlined the self-evident advantages of the heavy-duty tugger train in view of the increasing average age of people employed in logistics, as the physical performance capability of the operator is no longer relevant.

The mini dome camera placed above the frame provides a panoramic view of the frame as well as the loading and unloading areas and transmits the live images to the control panel on the tractor. In addition, the system indicates the next useful action to the driver. If the unloading area is occupied, the driver is only allowed to pick up load carriers, whereas in vacant areas loads must be set down. Additionally installed laser-controlled positioners enable precise positioning of the tractor so that it can place the load carrier exactly in its designated storage space.