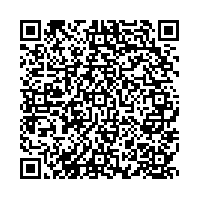 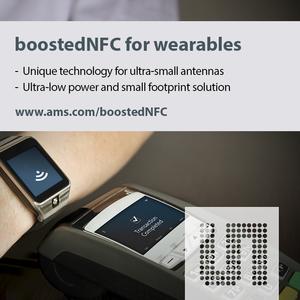 The new AS3921 is an NFC analog front end (AFE) with the unique boostedNFC technology from ams, which increases the useable operating volume of an NFC reader by up to 900% when compared to conventional NFC implementations. This greatly improves the reliability and perceived speed of NFC transactions, particularly in devices such as smart watches and wristbands that only have room for an extremely small antenna. It also ensures reliable NFC transmission in other device types which have a smaller antenna than a contactless card’s, or which present difficult operating conditions for NFC transmissions.

Optimised for space-constrained assemblies, the AS3921 enables OEMs to implement a simpler design than the conventional NFC controller-based architecture allows, resulting in a simpler and cheaper solution, occupying a board footprint around one third smaller, using fewer components and consuming less power.

Drawing just 12µA in normal operation, and providing a power-saving Secure Element wake-up function, the AS3921 drains far less power from the battery than NFC controller circuits, which typically draw 60µA or more.

Packaged in an ultra-compact wafer-level chip-scale package (WL-CSP) measuring just 2.115mm x 1.735mm, and connecting directly to the Secure Element with few external components required, the AS3921 with boostedNFC technology implements active load modulation: it generates an RFID card response which is synchronous to the reader’s field. This allows for card-to-reader communication at coupling factors as much as one order of magnitude lower than is possible with the passive load modulation (PLM) used by contactless cards.

A device which uses the AS3921 and which has an antenna of just 100mm2 can achieve the same or a bigger operating volume as a contactless card with a conventional PLM circuit, transmitting via an antenna typically at least 2,150mm2 in area. In some cases, the device might need no dedicated NFC antenna at all, provided its metal casing can be used in place of a normal antenna.

This means that manufacturers of devices that include the AS3921 can give the consumer a far better experience when using the device for contactless payments or ticketing:
The AS3921 complies with the ISO/IEC 14443 (types A and B) and FeliCa™ RFID protocols. Its superior NFC performance also makes it easier for manufacturers of wearables and other space-constrained devices to conform to the EMVCo standard for use with contactless payment terminals. The superior coupling capability of devices equipped with the AS3921 also provides for better performance when used with readers that are not fully compliant with NFC standards, enabling device manufacturers to quickly achieve interoperability with such readers. ams’ boostedNFC technology is the only proven solution for portable and wearable devices that has been deployed and qualified for use by transit operators in various cities in China including Beijing, Guangdong, and Shenzhen, and that does not require a different antenna configuration for each city.

For easy integration into existing products, the NFC analog front end AS3921 can connect directly to the contactless interface of the Secure Element through an ACLB or NFC-WI interface. An on-chip EEPROM allows the operating settings to be selected and programmed by the customer. The AS3921 can also be connected to an NFC tag or NFC interface chip.

The chip provides Q factor adjustment and implements automatic power control in order to avoid saturation of the reader and to provide reliable operation even in environments which hamper NFC transmissions. This makes it easier for equipment manufacturers to achieve interoperability with all kinds of standard-compliant and non-compliant readers.

The low-power operation of the AS3921 makes it ideal for use in wearables and mobile devices, since the frequency of battery recharging is one of the main concerns of users of the new generation of devices such as smart watches. The AS3921 can be used to wake up the Secure Element when it detects the presence of a reader’s field, allowing the Secure Element to spend the rest of the time in shut-down mode.

‘In a new compact package, the AS3921 marks a breakthrough in contactless payment capability for the smallest and most popular new device types such as smart watches and wristbands. Users of these devices will be able to use them to pay for goods in stores quickly, conveniently and reliably when their secure NFC communication is enabled by an AS3921 IC’, said Mark Dickson, marketing director for the Wireless Connectivity division at ams.

A demonstration board for the AS3921/22 is available from the ams ICdirect online shop. For sample requests and for more technical information, please go to www.ams.com/NFC-Front-End/AS3921. 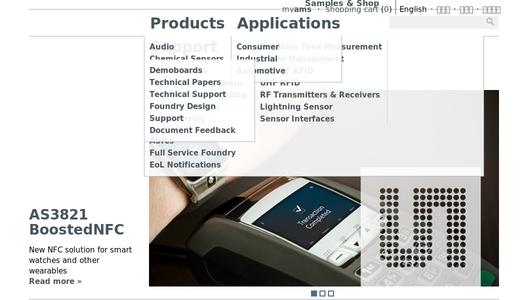 ams is a global leader in the design and manufacture of advanced sensor solutions and analog ICs. Our mission is to shape the world with sensor solutions by providing a seamless interface between humans and technology. ams' high-performance analog products drive applications requiring extreme precision, dynamic range, sensitivity, and ultra-low power consumption. Products include sensors, sensor interfaces, power management and wireless ICs for consumer, communications, industrial, medical, and automotive markets.

With headquarters in Austria, ams employs over 1,800 people globally and serves more than 8,000 customers worldwide. ams is listed on the SIX Swiss stock exchange (ticker symbol: AMS). More information about ams can be found at www.ams.com.