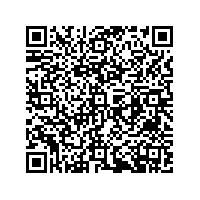 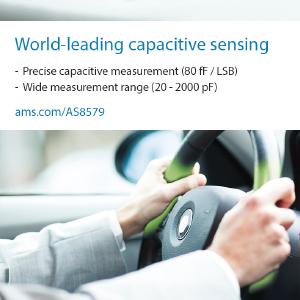 Premstaetten, Austria (November 18, 2020) -- ams (SIX: AMS), a leading worldwide supplier of high performance sensor solutions, today launches an automotive-qualified capacitive sensor which enhances the safety of assisted driving systems in road vehicles. The new AS8579 performs hands-on detection more reliably, at lower costs, and on the steering wheel vs on the steering rod where torque sensors have traditionally been used. The introduction of the AS8579 capacitive sensor gives automotive manufacturers a better way to comply with United Nations regulation 79 – already adopted by the European Union – which requires all new production vehicles that offer a Lane Keeping Assist System (LKAS) and sold in Europe to include hands-on detection in the steering wheel from 1 April 2021.

The AS8579 implements a novel technique for capacitive sensing, performing separation of resistive and capacitive parts (amount/share/proportion) of the impedance measured over the sensor element. This technique more reliably detects the presence of the driver’s hands when wearing gloves, or in humid conditions, than the charge-discharge method of capacitive sensing in use in vehicles today. This means that the AS8579 helps car manufacturers improve the safety of Advanced Driver Assistance Systems (ADAS), while also reducing the cost of the hands-on detection system: the AS8579 senses the impedance of the steering wheel’s heater element, while competing capacitive sensing systems for hands-on detection require a dedicated metal sensor element to be built into the steering wheel.

Alexander Rensink, Business Segment Manager Position Sensors at ams, said: “The development of new, more sophisticated ADAS functions, and in the future fully or partly autonomous driving systems, promise huge benefits for car users and for society – smoothing traffic flow, the aim of reduced number of accidents in which the driver is at fault, and making road travel more enjoyable. Safety must always come first. ADAS technology requires the driver to stay alert and focused on the road. By introducing the first system for hands-on detection which cannot be fooled, and which works in all driving conditions, ams has made a huge contribution to the safety of the next generation of ADAS-equipped vehicles.”

The development of a reliable method for detecting the presence of the driver’s hands on the steering control removes one of the important barriers in the way of mass deployment of ADAS in passenger and commercial vehicles. Automotive manufacturers are implementing increasingly sophisticated forms of autopilot functions, including adaptive cruise control and traffic jam stop-start systems, as well as LKAS. All require the driver to be ready to assume control of the vehicle instantly in case the vehicle systems fail to detect a safety threat, and hands-on detection is a key part of all systems for monitoring driver readiness.

Torque sensors have been used in the past to detect the continual, minute deflections produced when the driver grips the steering wheel, but this form of hands-on detection can be easily – and illegally – fooled causing risk to themselves and other road users.

Now, the trend in the car industry is to use capacitive sensing for hands-on detection, as it is more reliable towards human touch and can be simpler and cheaper to design and build than other options.

By implementing reliable capacitive sensing based on I/Q demodulation, the AS8579 capacitive sensors from ams enables car manufacturers to attain the highest standards of safety in the more sophisticated autopilot and driver assistance functions under development today.

The safety credentials of the AS8579 also include the provision of multiple on-chip diagnostic functions, ensuring support for the ISO 26262 functional safety standard up to ASIL Grade B. The sensor is qualified to AEC-Q100 Grade 1. Operating at one of four selectable driver-output frequencies – 45.45kHz, 71.43kHz, 100kHz or 125kHz – the AS8579 offers high immunity to electro-magnetic interference.

It is supplied in an SSOP24 package and operates from a supply voltage of 5V.

The AS8579 automotive capacitive sensor is available for sampling, also an evaluation kit is available. For more technical information or for sample requests, go to https://ams.com/AS8579.

ams is a global leader in the design and manufacture of advanced sensor solutions. Our mission is to shape the world with sensor solutions by providing a seamless interface between humans and technology.

With headquarters in Austria, ams employs around 9,000 people globally and serves more than 8,000 customers worldwide. ams is listed on the SIX Swiss Exchange (ticker symbol: AMS). More information about ams can be found at