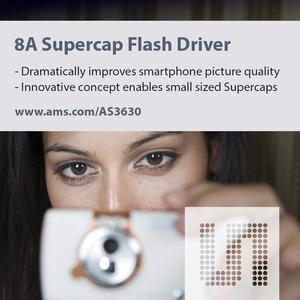 The new AS3630 can drive up to 8A current through an LED flash system, enabling mobile phone cameras to take pin-sharp images. Pictures of fast-moving objects in dark conditions that previously would have suffered from motion artifacts may now be captured in precise detail. At the same time, glare and discomfort can be avoided because even short flash durations as low as 10ms provide sufficient light.

Compared to today's LED flash drivers in mobile phones typically providing a maximum 2A output, the AS3630 is rated for an output four times higher and supports substantially faster shutter speeds.

The AS3630 8A LED flash driver uses an innovative, patent-pending architecture that fully exploits the energy stored inside a supercap (Electric Double Layer Capacitor, or EDLC). Driving two LEDs in series, the output of the supercap is always boosted from 5.5V to typically higher than 9V, to match the forward voltage of the LEDs. The boost topology employed also keeps the flash illuminated longer when the output from the unassisted capacitor would fall below the LEDs' forward voltage. This architecture enables the use of the smallest capacitors.

The AS3630 photo flash driver also combines power from the EDLC with power from the phone battery, increasing the power available to the flash light system and supporting additional functions such as pre-flash and video light even when the supercap is discharged.

Driving two flash LEDs in series also provides for consistent light output. Especially in such high power flash applications, parallel LED architectures suffer from high variations in light output from one unit to another because of production variations between LEDs.

The serial LED architecture used by ams solves this problem, delivering a perfectly matched light output from both flash LEDs that is unaffected by variations between LED production units.

To optimize system performance, ams has collaborated with passive component manufacturer Murata, matching the feature set of the AS3630 with thin, high-capacity EDLCs from Murata.

'When the AS3630 is used in combination with a high-performance EDLC such as the DMF series from Murata, a smartphone's camera can achieve dramatic improvements in image quality while retaining the thin profile that consumers value so highly in mobile phones', said Oliver Weber, Marketing Manager (Optical Sensors and Lighting) at ams.

A demonstration board for the AS3630 is available. For further information on the AS3630 or to request samples, please visit www.ams.com/....

With headquarters in Austria, ams employs over 1,300 people globally and serves more than 7,800 customers worldwide. ams is the new name of austriamicrosystems, following the 2011 acquisition of optical sensor company TAOS Inc. ams is listed on the SIX Swiss stock exchange (ticker symbol: AMS). More information about ams can be found at www.ams.com.