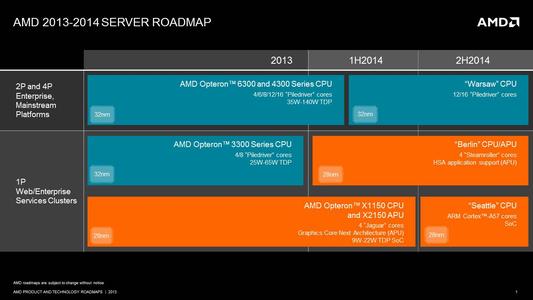 Additionally, AMD revealed details of its 2014 server portfolio including best-in-class Accelerated Processing Units (APUs), two- and four-socket CPUs, and details on what it expects to be the industry's premier ARM server processor. This is on the heels of announcing the general availability of the AMD Opteron(TM) X-Series processor, code named "Kyoto," which dominates the small-core server market on every performance benchmark. These forthcoming AMD Opteron(TM) processors bring important innovations to the rapidly changing compute market, including integrated CPU and GPU compute (APU); high core-count ARM servers for high-density compute in the data center; and substantial improvements in compute per-watt per-dollar and total cost of ownership.

"Our strategy is to differentiate ourselves by using our unique IP to build server processors that are particularly well matched to a target workload and thereby drive down the total cost of owning servers. This strategy unfolds across both the enterprise and data centers and includes leveraging our graphics processing capabilities and embracing both x86 and ARM instruction sets," said Andrew Feldman, general manager of the Server Business Unit, AMD. "AMD led the world in the transition to multicore processors and 64-bit computing, and we intend to do it again with our next-generation AMD Opteron families."

In 2014, AMD will set the bar in power-efficient server compute with the industry's premier ARM server CPU. The 64-bit CPU, code named "Seattle," is based on ARM Cortex(TM) -A57 cores and is expected to provide category-leading throughput as well as setting the bar in performance-per-watt. AMD will also deliver a best-in-class APU, code named "Berlin." "Berlin" is an x86 CPU and APU, based on a new generation of cores named "Steamroller." Designed to double the performance of the recently available "Kyoto" part, "Berlin" will offer extraordinary compute-per-watt that will enable massive rack density. The third processor announced today is code named "Warsaw," AMD's next-generation 2P/4P offering. It is optimized to handle the heavily virtualized workloads found in enterprise environments including the more complex compute needs of data analytics, xSQL and traditional databases. "Warsaw" will provide significantly improved performance-per-watt over today's AMD Opteron(TM) 6300 family.

"Seattle" will be the industry's only 64-bit ARM-based server SoC from a proven server processor supplier. "Seattle" is an 8- and then 16-core CPU based on the ARM Cortex-A57 core and is expected to run at or greater than 2 GHz. The "Seattle" processor is expected to offer 2-4X the performance of AMD's recently announced AMD Opteron X-Series processor with significant improvement in compute-per-watt. It will deliver 128GB DRAM support, extensive offload engines for better power efficiency and reduced CPU loading, server caliber encryption, and compression and legacy networking including integrated 10GbE. It will be the first processor from AMD to integrate AMD's advanced Freedom(TM) Fabric for dense compute systems directly onto the chip. AMD plans to sample "Seattle" in the first quarter of 2014 with production in the second half of the year.

"Berlin" is an x86-based processor that will be available both as a CPU and APU. The processor boasts four next-generation "Steamroller" cores and will offer almost 8X the gigaflops per-watt compared to current AMD Opteron(TM) 6386SE processor. It will be the first server APU built on AMD's revolutionary Heterogeneous System Architecture (HSA), which enables uniform memory access for the CPU and GPU and makes programming as easy as C++. "Berlin" will offer extraordinary compute per-watt that enables massive rack density. It is expected to be available in the first half of 2014.

"Warsaw" is an enterprise server CPU optimized to deliver unparalleled performance and total cost of ownership for two- and four-socket servers. Designed for enterprise workloads, it will offer improved performance-per-watt, which drives down the cost of owning a "Warsaw"-based server while enabling seamless migration from the AMD Opteron 6300 Series family. It is a fully compatible socket with identical software certifications, making it ideal for the AMD Open 3.0 Server - the industry's most cost effective Open Compute platform. It is expected to be available in the first quarter of 2014.

This press release contains forward-looking statements concerning AMD, its server roadmap and strategy, its ability to recapture market share in enterprise and data center servers, and the timing, features and functionality of AMD's future products, which are made pursuant to the safe harbor provisions of the Private Securities Litigation Reform Act of 1995. Forward-looking statements are commonly identified by words such as "would," "may," "expects," "believes," "plans," "intends," "projects," and other terms with similar meaning. Investors are cautioned that the forward-looking statements in this document are based on current beliefs, assumptions and expectations, speak only as of the date of this document and involve risks and uncertainties that could cause actual results to differ materially from current expectations. Risks include the possibility that Intel Corporation's pricing, marketing and rebating programs, product bundling, standard setting, new product introductions or other activities may negatively impact the company's plans; the company may be unable to develop, launch and ramp new products and technologies in the volumes that are required by the market at mature yields on a timely basis; that the company's third party foundry suppliers will be unable to transition its products to advanced manufacturing process technologies in a timely and effective way or to manufacture the company's products on a timely basis in sufficient quantities and using competitive technologies; the company will be unable to obtain sufficient manufacturing capacity or components to meet demand for its products or will not fully utilize its commitment with respect to GLOBALFOUNDRIES microprocessor manufacturing facilities; that customers stop buying the company's products or materially reduce their operations or demand for the company's products; that the company may be unable to maintain the level of investment in research and development that is required to remain competitive; that there may be unexpected variations in the market growth and demand for its products and technologies in light of the product mix that the company may have available at any particular time or a decline in demand; that the company will require additional funding and may be unable to raise sufficient capital on favorable terms, or at all; that global business and economic conditions will not improve or will worsen; that demand for computers will be lower than currently expected; and the effect of political or economic instability, domestically or internationally, on the company's sales or supply chain. Investors are urged to review in detail the risks and uncertainties in the company's Securities and Exchange Commission filings, including but not limited to the Quarterly Report on Form 10-Q for the quarter ended March 31, 2013.

Bei der Entwicklung von Cloud-Applikationen hat sich in den letzten Jahren ein klarer Trend vom Monolithen zu Microservices abgezeichnet. Diese funktionieren nach dem Baukastenprinzip: Größere Applikationen werden bereits im Entwicklungsprozess in kleine, flexible Module unterteilt, die über Schnittstellen (APIs) untereinander Daten austauschen. read more
The publisher indicated in each case is solely responsible for the press releases above, the event or job offer displayed, and the image and sound material used (see company info when clicking on image/message title or company info right column). As a rule, the publisher is also the author of the press releases and the attached image, sound and information material.
The use of information published here for personal information and editorial processing is generally free of charge. Please clarify any copyright issues with the stated publisher before further use. In the event of publication, please send a specimen copy to service@pressebox.de.