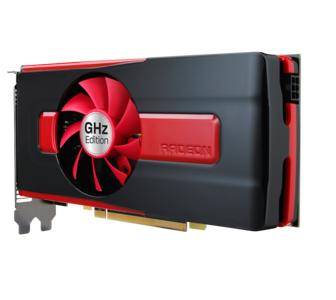 "We were first to 40nm, first to 28nm and now we offer the world's first GPU at 1GHz; this is a milestone for the graphics industry," said Matt Skynner, corporate vice president and general manager, GPU Division, AMD. "AMD continues to deliver superior performance, rich features and world-class power efficiency - we never stop innovating."

The AMD Radeon(TM) HD 7700 series GPUs will be available worldwide from add-in-board partners including Sapphire, Powercolor, HIS, XFX, ASUS, Gigabyte, and MSI.

[1] The GCN Architecture and its associated features (PCI Express® 3.0, AMD ZeroCore Power technology, DDM Audio, and 28nm production) are exclusive to the AMD Radeon(TM) HD 7900 and HD 7700 Series Graphics.
[2] AMD Eyefinity technology works with games that support non-standard aspect ratios, which is required for panning across multiple displays. To enable more than two displays, additional panels with native DisplayPort(TM) connectors, and/or DisplayPort(TM) compliant active adapters to convert your monitor's native input to your cards DisplayPort(TM) or Mini-DisplayPort(TM) connector(s), are required. Support for five simultaneous displays may require complementary products compatible with DisplayPort 1.2 Multi-Stream Transport. Maximum number of configured displays may vary - check with your component or system manufacturer for specific model capabilities and supported technologies. SLS ("Single Large Surface") functionality requires an identical display resolution on all configured displays.
[3] AMD App Acceleration is a set of technologies designed to improve video quality and enhance application performance. Full enablement of some features requires support for OpenCL(TM) , DirectCompute or DirectX® Video Acceleration (DXVA). Not all products have all features and full enablement of some capabilities and may require complementary products.
[4] AMD PowerPlay(TM) , AMD PowerTune and AMD ZeroCore Power are technologies offered by certain AMD Radeon(TM) products, which are designed to intelligently manage GPU power consumption in response to certain GPU load conditions. Not all products feature all technologies - check with your component or system manufacturer for specific model capabilities.
[5] Utilization of PCI Express 3.0 bandwidth requires a mainboard equipped with a PCI Express 3.0 PHY. Not all mainboards feature this technology - check with your component or system manufacturer for specific model capabilities.