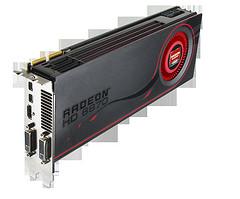 [1] Based on AMD internal testing.

[2] AMD's product warranty does not cover damages caused by adjusting clocks and voltages even when such adjustments are enabled via AMD OverDrive(TM) software.

[4] Based on AMD internal synthetic testing that demonstrates the AMD Radeon(TM) HD 6970 achieves up to 2.9x the tessellation rate of the ATI Radeon(TM) HD 5870.

[6] AMD Eyefinity technology works with games that support non-standard aspect ratios, which is required for panning across multiple displays. To enable more than two displays, additional panels with native DisplayPort(TM) connectors, and/or DisplayPort(TM) compliant active adapters to convert your monitor's native input to your cards DisplayPort(TM) or Mini-DisplayPort(TM) connector(s), are required. AMD Eyefinity technology can support up to 6 displays using a single enabled AMD Radeon(TM) graphics card with Windows Vista® or Windows® 7 operating systems - the number of displays may vary by board design and you should confirm exact specifications with the applicable manufacturer before purchase.

[7] AMD HD3D is a technology designed to enable stereo 3D support in games, movies and/or photos. Game support made possible through partners including iZ3D and DDD.