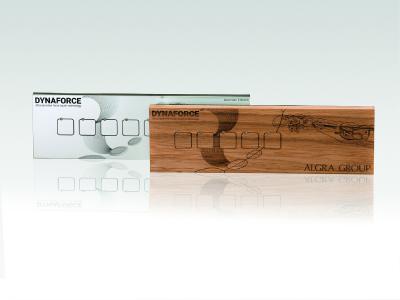 (PresseBox) ( Merenschwand, Switzerland, 21-01-27 )
With DYNAFORCE, touch operation is easier than ever before. This is made possible by Algra Group's innovative strain gauge technology, which turns rigid surfaces into an input front in the blink of an eye.

Whether on your smartphone, at public machines or around the house - for many people, touch-based operation has become a firmly established part of everyday life. The Algra Group's strain gauge technology makes touch operation possible on more atypical surfaces such as metal, glass or even wood.

"The strain gauge technology recognises even the smallest deformations in the material layer," explains Dieter Matter, CEO of the Algra Group. "This is enough to activate the button and trigger a function." This technological feat is made possible by intelligent software and a sensor network that is made up of strain gauges. These can determine where you are touching and thus activate the button.

The DYNAFORCE sensors are extremely touch-sensitive and function without problems on sheet thicknesses of between 0.3 and 1.2 mm. There is one of these sensors for each button on the circuit board. This network of sensors then detects even the finest mechanical deformations and uses the intelligent software to filter out interfering signals.

As DYNAFORCE sensors are force sensors, functions can be differentiated based on the force exerted upon the sensor. With a lamp, for example, a hard press of the button may cause the light to turn on, while a gentler press of the button could lower the brightness.

Another possibility is visual feedback through an LED or a display. In addition, you can choose any sound to play as acoustic feedback. With DYNAFORCE, these variants can be combined in any way you wish.

Typical applications for DYNAFORCE are designer products that are used around the house, in an industrial setting, or in a public space, as well as applications with high demands on robustness and water resistance. The input technology will blow you away with its elegant design, its easy installation process (peel-and-stick), its operational capability in a wide range of temperatures (-40° C to +85° C), and the fact you can operate the buttons even when you are wearing gloves.

It’s simple with the DYNAFORCE Demo and Developer Kit. You will receive a demo module with optical, acoustic and haptic feedback. Once connected to your PC, the keys respond to the soft touch of your finger on the 1 mm thick aluminium front. The included USB stick contains the DesignStudio software. Install it on your PC and observe the effectiveness of every keystroke. Gentle, forceful, between two keys, long, slider or force-dependent Force Touch – you can see exactly what happens on the screen.

The Demo and Developer Kit includes three identical 4-key modules with double-sided adhesive tape. You can use it to create your first prototype with your own materials according to your own idea. You note how it works, how it feels and if the prototype meets your requirements. And just like that, you’ve begun developing your new device.

Start your project by acquiring a DYNAFORCE Demo/Developer Kit – ideally via https://www.algragroup.ch/en/technologies/dynaforce-metal-touch-input-technology/. You can order the case online. If you have any questions, you can arrange an online appointment with the specialists at Algra tec AG.

The Algra Group comprises the brands Algra, gravuretec, connect tec and Trimada and employs approximately 80 staff members at locations in Merenschwand, Erlach and Wohlen. It is an internationally leading manufacturer of input systems, high-quality fronts, enclosures and signs as well as software and hardware. These segments of our range are also supplemented by trade products.

DYNAFORCE: The innovative operating technology for rigid and robust surfaces