airfy is starting up with free WiFi and German technology 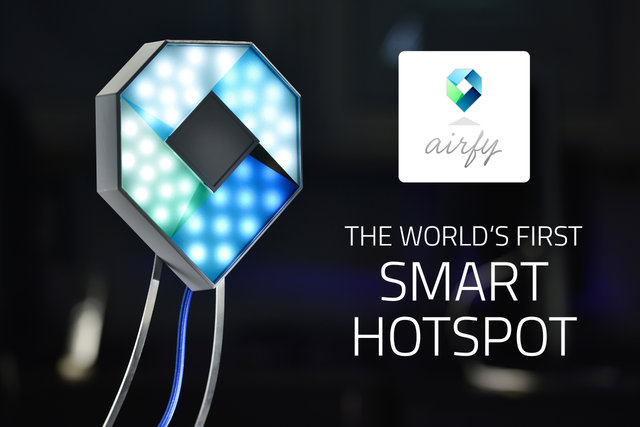 (PresseBox) ( Munich, 13-12-02 )
The German company airfy GmbH - a start-up from Munich - is offering free WiFi access anywhere and whenever you want. Everyone can use it - whether private individuals or hotel owners, shops and even public administration offices that make it available to their clients and visitors. For one hour's surfing, a short commercial lasting a mere ten seconds is played first.

Surfing with WiFi couldn't be easier: Users sign into the airfy network and will get a personal WiFi Password (WPA2). From the second time it is used, the smartphone or tablet automatically dials into the mobile wireless network. This is a new standard function developed by airfy, which does not exist yet in any other public WiFi network. What is more, the technology is absolutely secure - the data is encrypted and protected against access by third parties. At present, everyone can participate in further developing the hotspot network via the crowdfunding platform www.indiegogo.com - Further details on this can be found on the company's website (www.airfy.de).

The start-up is presenting this means of surfing at indiegogo starting saturday 30th. Best of all, the possibilities offered by WiFi are truly diverse and far from being exhausted. By way of illustration, users have the convenient option of paying at the supermarket checkout with their smartphones instead of with cash or their ATM cards. Mobile payment is possible by downloading a smartphone app. The WiFi service takes care of the money transfer in the background. Another app enables users to find out about opening times and special promotions offered by shops or to reserve a table in their favorite restaurant if the owners of the business are members of the airfy community. The Bluetooth Low Energy Beacons function (BLE) is particularly interesting for retailers. All major brand dealers will be following this trend over the next few years. If someone sees an item in a shop or in a shop window, they can save the item, find out the price and buy it even if the shop is closed.

airfy's specially developed routers form the heart of the technology, which have been designed both for public and normal use. A home zone is used to separate the private from the public network. The airfy router has over 50 built-in LEDs via which it communicates with the users. By way of example, if a friend has posted news on Facebook, the router lights up. Best of all, you do not need to own a router yourself in order to be part of the community.

To date, problems plaguing public WiFi networks include complicated log-in processes, unsecure connections and high costs. airfy has overcome all of these difficulties and finances its free, continuously available WiFi service by showing short pop-up ads. A quick ten-second commercial corresponds to one hour's free surfing. At the end of the first hour, another ten-second commercial is shown. There is no time limit on how long you can surf. The data is encrypted with WPA2, meaning that no one else can read your data in the public WiFi network. airfy is also liable for the actions of the users on public premises. The responsibility for the actions of the WiFi guests is assumed by airfy, thus relieving the WiFi operator (such as the café owner) of this onus.

The solution here involves transmitting all the WiFi guests' data via VPN to airfy servers before it is sent on to the Internet. As such, the WiFi operator is legally protected.

The company airfy GmbH was set up in October 2013 and currently consists of a team of eight developers experienced in all things Linux and WiFi. The team has spent the last 13 months working on the implementation and development of this WiFi technology. The project is financed from turnover from current WiFi deals with industry and at present still manages without investors. airfy CEO Steffen Siewert and his team have already implemented city-wide WiFi networks for fire departments and The German Aerospace Centre (DLR) and can lay claim to over ten years of experience in WiFi technology.

Edge-Computing-Technologien werden mit der wachsenden Popularität von KI und IoT für viele Branchen interessanter. Schnelle Prozessoren und flexibel einsetzbare Edge-Module begünstigen dabei die zunehmende Vielfalt an Anwendungsszenarien. read more
The publisher indicated in each case is solely responsible for the press releases above, the event or job offer displayed, and the image and sound material used (see company info when clicking on image/message title or company info right column). As a rule, the publisher is also the author of the press releases and the attached image, sound and information material.
The use of information published here for personal information and editorial processing is generally free of charge. Please clarify any copyright issues with the stated publisher before further use. In the event of publication, please send a specimen copy to service@pressebox.de.