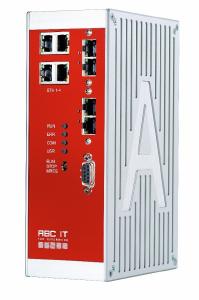 (PresseBox) ( Nürnberg, 19-07-25 )
ABC IT cannot green! The basic colour of the company logo is still red and this will be kept that way. However, the products are more than green. Plastic, only if necessary. A throw-away product, no sign of it! Artificial intelligence, no, that`s not an option! The products of ABC IT are characterized by functional and sustainable intelligence, embedded in the topic of retrofit. CO2 is a concern to them. For 20 years they have been upgrading old equipment; economically and ecologically.

By the way, 30 years ago Mr. Wernfried Ahrens, the managing director of ABC IT wrote his diploma thesis (For younger readers: This is something like a master with only four optional subjects) with the title “Use of artificial intelligence in communications systems”.

He came back to the subject of artificial intelligence because recently he noticed an advertisement in a trade journal of the automation industry. "AI Inside". Not exactly the wording, but a reflection of despair. Oh, yeah, there was something! Industry 4.0, no longer a money-spinner? Artificial intelligence, an affront to all our human intelligence!

But now enough of the confusion, which is certainly also due to summer time, up to the hard facts of the ABC X-CPU-3 c57. The small 'c' stands for compact. So a compact controller for all industrial applications. Preferably this controller speaks the languages Siemens STEP5, STEP7, is to be incorporated under Siemens TIA as CPU416 and is integrated into the control system structure of PCS7 from Siemens. A controller with which you can modernize

CO2- reducing and additionally follow the lifestyle of the modern age.

If you have not yet purchased an AI system to modernize your plant, which advises you and points out possible solutions, but ultimately refers to ABC IT as a solution provider, you can also contact ABC IT directly.

They will be happy to advise you comprehensively!

The ABC X-CPU-3 c57 is full of functional intelligence. Four separate Gigabit Ethernet ports communicate both homogeneously and heterogeneously. They always form an end point and are therefore IT security safe.

Up to four master systems can be accommodated on the c57. The type of master is determined flexibly depending on the application.

Programming takes place in the automation languages from Siemens. And for those who don’t know it better, they promise you four languages on one hardware and also combined!

By the way, there is only one c57 hardware anyway and therefore only one spare part. Sophisticated warehousing!

And then there’s the Global Data Xchange (GDX). Simply brilliant!

Further information can be found at www.abcit.eu.