AFAG Trade Fairs cooperating with industry insider Hess GmbH / Next ReTEC 25-27 April 2017 in Augsburg / Over 300 exhibitors / 5,000 visitors expected from around the world / Great demand po-tential from the developing countries. 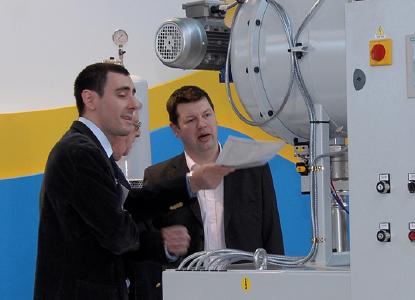 (PresseBox) ( Augsburg, 16-09-05 )
The renown, private German trade fair organizer “AFAG Messen und Aussstellungen GmbH”, Nürnberg − Augsburg, and the trade fair consultants Hess GmbH, Weingarten (Baden) are cooperating in further development and reorientation of the ReTEC “International Trade Fair for Used Technology”, which was initiated by Hess GmbH.
AFAG has assumed the function of trade fair organizer, the FDM Asso-ciation of Machine and Tools Wholesalers in Bonn provides technical sponsorship, and Hess GmbH advises the organizer. The European Association of Machine Tool Merchants (EAMTM) in Brussels renders technical support. Beyond this, many national associations and tech-nical publications have been won over as competence partners.

As an international trade fair for used technology, ReTEC is moving closer to the most important European markets of mechanical engineer-ing. It will be held from 25 27 April 2017 at Messe Augsburg, parallel to the Hannover Fair (24 28 April 2017), and in April 2018 at Messe Es-sen. The Augsburg location will appeal especially to the strong potential for demand in southern Germany, Switzerland, northern Italy and Aus-tria, whereas the Essen location in north-western Germany will also ap-peal to demand in Belgium, the Netherlands and Luxembourg.

AFAG Messen now has 15 trade fair events in its portfolio, including three international leading trade fairs including, for example, the Grind Tec International Trade Fair for Grinding Technology in Augsburg, which is one of the most important trade fairs of the metal processing sector throughout the world.

Hess GmbH, as organizer of the Resale and Usetec fairs for many years, advises AFAG, a private, competent, very well established, inter-nationally active trade fair organizer, in regard to developing ReTEC for used machines and systems from all product ranges. Thus, due to the short decision paths it has become possible for the cross-sector, com-plex market’s very specific requirements to be responded to effectively.

ReTEC’s technical sponsor is the FDM Association of Machine and Tools Wholesalers in Bonn. Kurt Radermacher, FDM’s executive man-ager, has said he is pleased that this important trade fair platform of his sector has a future again and that ReTEC, the “World of Used Technol-ogy”, will be presented yearly, beginning in 2017 and alternating be-tween Augsburg and Essen. Indeed, as Rademacher pointed out, with its extraordinarily successful international trade fair for abrasive tech-nology, Grind Tec, AFAG already enjoys great technical proximity to this sector. The associations which support it, he continued, particularly the Association of Machine and Tools Wholesalers, FDM, as technical sponsor, and the European Association of Machine Tool Merchants, EAMTM, welcome this new constellation with its independent trade fair organizer and alternating locations.

Ton Matena, president of EAMTM, Brussels, has said, “The European Association of Machine Tool Merchants (EAMTM) regard ReTEC as a strong, unique marketing tool and important market place on which Eu-ropean and international dealers can present their special offers to pro-spective buyers from the entire world. The trade fair’s face to face con-cept is also irreplaceable in today’s world of the internet and social me-dia. EAMTM will provide one of the largest exhibitor groups and support the trade fair makers from AFAG and Hess GmbH in every respect to bring ReTEC to a great success in 2017 and the years thereafter.”

Together with its partners, AFAG is counting on a large international public and the very special, individual needs of the buyers from all re-gions of the world, above all from eastern Europe, Africa and Asia. Strong demand is also anticipated from Iran, Turkey, India, Egypt and Nigeria.

Used machines, as opposed to new machines with long delivery times, are available immediately and the price is reasonable. New machines do not fit in everywhere with actual needs. For example, the developing countries need robust, easy to use, low-priced machines that also work under extremely difficult conditions. In most cases, production and maintenance of a minimum of infrastructure and of a reasonable power supply, as well as guaranteeing pragmatic, basic training in use of the machine, are much more important there than are high-tech in high-end format.

At ReTEC, the focus will also be on marketing used machines which, of course, become available, and must be taken away, when new ma-chines are sold. For many users and specialists, reasonably priced, used technology is important where new machines are profitable only when they can be run at full capacity in multi-shift operations. Young, top quality used machines and also special tools are available immedi-ately and in demand in German and European industry especially in cases of machine malfunction or as supplements to existent production systems.

ReTEC’s offer covers machines and systems for all sectors and branches of industry, including for example, construction machines, utili-ty vehicles, robotics and tool machines in the areas of metal and wood processing, processing of plastics, tools and accessories. Visitors from developing countries and the emerging markets will be especially inter-ested in offers in the area of foodstuffs packaging machines and pro-cess engineering. In addition, the ReTEC exhibitors will also offer a broad selection of services such as retrofitting, control technology, de-mounting, remounting and also special transports of used machines.
The requirements on production and applications, which keep becoming more and more specialized and individual, the search for custom-made solutions and the special challenges for production in developing coun-tries, as well as the currently very favourable framework conditions in the market and the relatively low cost of euros will bring the needed power into this very special market and its own international trade fair.