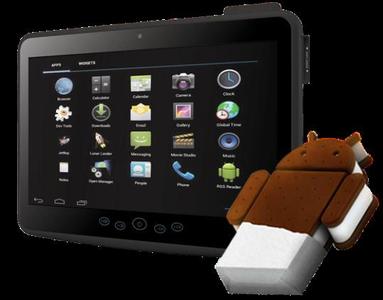 (PresseBox) ( Germering, 12-06-29 )
Advantech, the embedded platform and intelligent service platform provider, is happy to announce Android 4.0 support on its HIT-W181. HIT-W181 is an 18.5", 16:9 full-flat PCT or multi-touch terminal, with features including 2.0 megapixel camera, WiFi, VOIP, barcode reader, RFID, NFC, MSR and fingerprint reader. The slim, fanless all-in-one system, powered by an Intel® Atom(TM) or Intel® Core(TM) i7 processor is ideal for retail, exhibition hall, education/campus , vending, self-service and kiosk applications, where a fast, elegant and efficient system is needed. The availability of Android 4.0 is the first for Advantech and the first in the industry. Android 4.0 is more stable, runs faster, and offers a number of enhancements which are now available to the HIT-W181 infotainment termainal.

HIT-W181 is Ahead of the Curve

The announcement of Android 4.0 is exciting and handset manufacturers are scrambling to take advantage of the new features it offers. Advantech is already there, and in the industrial computer space no less! This is great news for end users of the HIT-W181 in areas such as retail, exhibition hall, education/campus,self-service, vending and kiosk, as well as for system integrators looking to take advantage of improvements in the Android environment.

Android 4.0 has a number of new features. It has replaced hardware/programmable buttons with a set of virtual keys, allowing quick and easy application development. Additionally, Android 4.0 brings native NFC (near field communications) support which will appeal to transaction-based applications that need reliable communications between handset and the HIT-W181 display. Security in Android 4.0 has also been greatly improved. The system supports face recognition coupled with auto-login for simple and secure authentication.

Android 4.0 is Faster and More Stable

HIT-W181 is able to take advantage of improvements in stability and speed that are a part of Android 4.0. System speed is 30% faster than under Android 2.3 and operating system stability has been enhanced giving the platform the stability needed to serve critical applications. Memory management under Android 4.0 has also been improved with better memory allocation and deallocation of tasks running on the system. The result is that HIT-W181 runs leaner and faster.

Advantech will continue to rollout support of Android 4.0 for its other HIT series Hospitality Infotainment Terminals: the HIT-W221, HIT-W151 and HIT-W121. For more information about HIT-W181, or other Advantech products and services, please contact a local sales office or visit us on the web at http://www.advantech.eu/ais/.

Founded in 1983, Advantech is a leader in providing trusted, innovative products, services, and solutions. Advantech offers comprehensive system integration, hardware, software, customer-centric design services, embedded systems, automation products, and global logistics support. We cooperate closely with our partners to help provide complete solutions for a wide array of applications across a diverse range of industries. Our mission is to enable an intelligent planet with Automation and Embedded Computing products and solutions that empower the development of smarter working and living. With Advantech, there is no limit to the applications and innovations our products make possible. (Corporate Website: www.advantech.com).