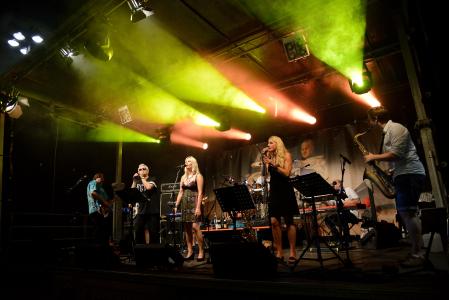 (PresseBox) ( Neu-Anspach / Straubing, 16-08-04 )
The city of Straubing celebrated the 700th anniversary of its city tower with a large festival. On two prominent stages, Gravity® stands ensured beautiful stability. “They did a great job and made our life easier,” says Michael Wittenzellner from the production company StereoMike.

The Lower Bavarian city of Straubing recently had every reason to celebrate: its picturesque tower – the town’s visual flagship – celebrated its 700th anniversary. The round birthday was honoured with a large festival. Joining the celebrations was Adam Hall Group’s newest brand of stands, Gravity®. Exclusively deployed on two of the four stages, Gravity® stands have won the internationally-recognized Red Dot and IF Design awards, while being recently nominated for the German Design Award.

Michael Wittenzellner, head of the rental company StereoMike and responsible for the production: “The event in Straubing was my Gravity® premiere. And I must say: the optically outstanding stands also fully convinced me in terms of handling and stability. They did a great job – which is why I also relied on them for the Bluetone festival.”

The StereoMike team was responsible for the sound reinforcement and equipment of the large and prominent “Goidhaibal” and “Karmeliten” stages on the Theresien- and Ludwigplatz. The musical guests included amongst others Bernie & The Magic Tones, TOPSIS, Kulticz and the Presley Family. Additionally, the grand opening of the city festival took place on the „Goidhaibal“ stage.

“The musicians’ feedback on the Gravity® stands was great,” says Wittenzellner. “Several musicians commented on the pleasant feel and the cool design. They also appreciated the interchangeable colour-rings.”

With the interchangeable colour-ring concept, the Gravity® stands can be personalised. In Straubing, the stage crew assigned a certain colour to the vocal microphones and a different one for the drum stands. “A small detail,” says Wittenzellner, “which however has a large effect in a sound engineer’s day-to-day business.”

The Adam Hall Group launched the Gravity® brand in 2015. The new range of stands comprises high-quality products for all stage and studio needs. With their special “Soft Touch” elements and colour details, Gravity® stands make a powerful aesthetic statement on stage. Furthermore, the stands facilitate the work of musicians and stagehands alike through the ease with which they adapt to the different requirements and preferences of performers. For further information, please visit www.gravitystands.com or a dealer near you.

The Adam Hall Group is a leading German manufacturing and distribution company providing event technology solutions around the globe to a diverse portfolio of business customers, including music instrument retailers and dealers, live event and rental companies, broadcast studios, AV and system integrators, private and public enterprises, and industrial flightcase manufacturers. The company offers a wide range of professional audio and lighting technology as well as stage equipment and flightcase hardware under its brands LD Systems®, Cameo®, Gravity®, Defender®, Palmer® and Adam Hall®.

Founded in 1975, the Adam Hall Group has evolved into a modern, innovative event technology company, including a 8,000 square metre warehouse and logistics centre at its Corporate Headquarters near Frankfurt, Germany. Focussing on quality, service orientation, and constant innovation, the Adam Hall Group has already won a number of prestigious international design awards for its first portable array system with high definition sound - the LD Systems CURV 500® series. Further information about the Adam Hall Group can be found online at www.adamhall.com.