World sensation: The Spix's Macaw is back

Extinct parrot species is being resettled in Brazil 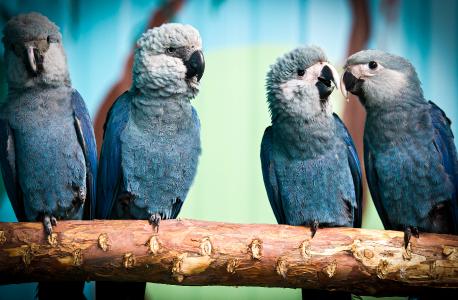 (PresseBox) ( Berlin, 20-03-03 )
Just in time for this year’s World Wildlife Day, today, 52 Spix's Macaw parrots, 49 from the ACTP headquarters in Berlin, 3 from Pairi Daiza in Belgium, will arrive in Brazil – here, they will be prepared for their reintroduction and further life in the wild over the next months. More information on spixs-macaw.org and #spixsAreComingHome.

This parrot species, which has been considered extinct in the wild for two decades, has been known worldwide since the movie "Rio", in which a Spix's Macaw named "Blu" plays the leading role. The excitement is correspondingly great in Brazil, where the villages of the Caatinga region and Curaçá City in the state Bahia in the northeast of the country are preparing to receive the birds. The reintroduction of the Spix's Macaw is part of a larger community program in Caatinga, which was declared a protected area in 2018, to promote biodiversity and organic farming. The approximately 7,500 students in the local schools will be taught about the project and will thus be sensitized to the topic of species conservation and eco-tourism.

The animals had fallen victim to decades of poaching and the loss of their natural habitat through cattle breeding and colonisation. Breeding seemed impossible as only a very small number of birds had survived and the genetic pool was too limited. So, the first attempts to breed were unsuccessful. In 2012, the Brazilian federal government agency ICMBio, Institute for the Conservation of Biodiversity, together with several partner organizations established an Action Plan to increase the captive population, protect the habitat and promote the reintroduction of the Spix’s Macaw.

In 2016, the non-profit organisation ACTP, which has been committed to the protection, conservation and development of threatened parrot populations and their habitats since its foundation in 2006, launched the "Spix Release Project" together with the ICMBio and the support of the Belgian Pairi Daiza Foundation. In 2018, all Spix stocks were therefore brought together at ACTP in Berlin. Under the supervision of a team of experts, a critical number of animals have been bred over the last few years. Fortunately, the captive breeding technology developed by the holders and the artificial insemination program of Al Wabra Wildlife Preservation from Qatar, helped increase the small population of 53 birds in 2000 up to 180 healthy parrots today. From these, the first animals are now to be resettled to their original home.

On March 3, 2020, the birds and their accompanying team of veteranians, animal keepers, biologists, members of the Brazilian government and cameramen will fly in a specially chartered aircraft to Petrolina in the Brazilian state of Pernambuco, not far from the parrots’ new destination: a large breeding and release center near Curaçá, in the state of Bahia. It is located on a 45 hectare site in the protected Caatinga area. Here, the parrots will be prepared for their life in the wild. In 2021, the first group of Spix's Macaws will be released into the wild.

The Spix's Macaw is a rare blue parrot from the Caatinga region in Brazil, which was discovered 200 years ago by the German researcher "Johann Baptist von Spix". It is one of the rarest birds in the world.

Its unique round beak and its special blue colour have made the Spix's Macaw a popular destination for poachers and collectors worldwide. The destruction of its natural habitat by humans and other animals in the 1980s and 1990s led to a steady decline in the population of the Spix's Macaw in the wild - until only one bird remained in the wild in 2000. In the same year, the species was officially declared extinct in the wild.

Recommend World sensation: The Spix's Macaw is back press release