ecoSplit-IXL - Throughput up to 4,300 wafers per hour

The “racer” among wafer singularization systems 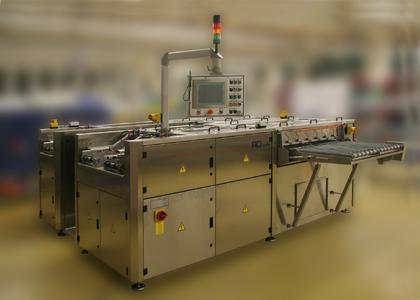 (PresseBox) ( Zimmern, 10-02-15 )
When it comes to separating solar wafers fully automatically before final cleaning, the ecoSplit IXL really defines the standards set by ACI-ecotec. One reason for this is the extremely high throughput – a customized system designed by ACI-ecotec separates 4,300 wafers per hour. Other factors which convince wafer manufacturers to purchase the system include the low breakage rate which has been reduced up to 0.1 percent and the compact plug-and-play construction.

When deciding which singularization system to buy, over recent months more and more wafer manufacturers have opted for the ecoSplit IXL made by ACI-ecotec GmbH & CO KG based in Zimmern ob Rottweil in Germany. Among other buyers, these include a major German manufacturer in Thüringen and an East European concern.

Continuous operation with over 3,600 wafers/h
The wafer manufacturer in Thüringen decided to purchase the ecoSplit IXL after completing a trial phase in which the company tested not only the singularization system made by ACI-ecotec but also two other competitive products. The main reason for choosing the solution from Zimmern was the high throughput. Running normally, the system splits over 3,000 wafers per hour and at peak times the company is capable of separating over 3,600 wafers/h. To achieve this, the system has two loading stations which can each be fed with stacks of up to 250 sawn wafers once they have been pre-cleaned and manually checked. The feeding solution makes this system unique throughout the world because it can be loaded during operation and thus avoid stopping times. This was another factor influencing the manufacturer’s decision to invest in the ecoSplit system. A further reason was the worldwide patented separation technology developed by ACI-ecotec which functions without the need for costly gripper or handling systems. With the so-called “dealing” technique (in the sense of dealing playing cards), in each case the bottommost wafer is removed from the stack by a special roller system. As has been proved, this process is so gentle that no marks are made on the surface of the sensitive solar wafers. The technology also permits wafers to be removed from the stacks one at a time, thus ensuring absolutely reliable singularization. Working in series operation, the both “simple” and gentle separating technology has enabled the company in Thüringen to attain a breakage rate below 0.4 percent.
Once they have been separated, the wafers are transported by individually-adapted units to a cleaning station. The ecoSplit can be combined with any common cleaning system worldwide. During singularization, wafers are kept constantly moist to prevent them from drying out. The complete singularization process – from loading the wafers right up until they are cleaned – is monitored and controlled by sensors as well as visualized on screen.
Other advantages include the low space requirement, the fact that the singularization system is made completely from stainless steel and also the plug-and-play construction with integrated switching cabinet. Among other things, the latter permits the system to be put into operation and staff to be trained how to use it within just five days. As a result of the high throughput, low breakage rate and a process stability of almost 100 percent, the Thüringen-based wafer manufacturer has now ordered its third singularization system from ACI-ecotec.

Customized solution with 4,300 wafers/h
For its production location in Spain, an East European wafer manufacturer was looking for a singularization system which could guarantee a minimum throughput of at least 3,600 wafers/h. By supplying a specially designed version of the modularly constructed ecoSplit, ACI-ecotec was able to provide an optimum solution. Feeding was extended to include a third loading station and the number of transportation units to the cleaning system increased accordingly. This modification now enables a throughput of 4,300 wafers/h, thus creating further company benefit.

We would be grateful to receive a copy of / link to all publications featuring content from this release. Thank you.

About ACI-ecotec
ACI-ecotec GmbH & Co. KG was founded in 2004 in St. Georgen, Germany, following the strategic acquisition and restructuring of ecotec GmbH by the ACI Group. The company, since January 2010 located in Zimmern ob Rottweil (Germany), is a global provider of innovative manufacturing equipment to the photovoltaic sector and automotive industry.
ACI-ecotec is a world leader in the photovoltaic sector thanks to state-of-the-art solutions such as ecoContact, the fully automatic contacting system for manufacturing thin-film modules, the wafer-separator system ecoSplit, and ecoCarrier – a carrier system for silicone cells and wafers. In addition, ACI-ecotec develops turnkey solutions in collaboration with partners.
For the automotive industry, ACI-ecotec mainly develops customer-specific automation solutions for diverse applications. In addition, OEM products such as the highly flexible transfer system ecoTrans and the (un)loading module ecoLoad are specially developed and marketed for the fully automatic handling of small parts that roll or move easily, individually or in bulk.
ACI-ecotec is a member of the ACI Group. This network of companies also includes acp – advanced clean production GmbH in Esslingen, producer of CO2 snow jet cleaning systems, micro dispensers and measuring solutions; Stuttgart-based acp IT AG, whose core competencies lie in IT solutions for production and planning; boraident GmbH in Halle that focuses on laser marking on glass products, micro structures in glass using laser technology, and glass sensors for plausibility assessments; and AFT-Automation & Feinwerktechnik GmbH in Ölbronn-Dürrn that produces the assembly and handling systems for micro assembly.

Recommend ecoSplit-IXL - Throughput up to 4,300 wafers per hour press release