ACI AG: new workpiece carrier for use in wafer and cell production 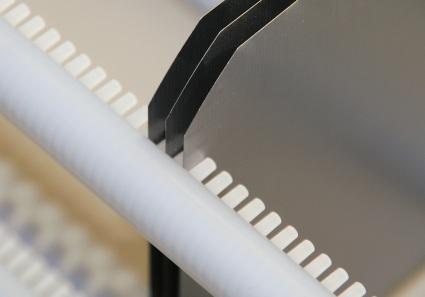 (PresseBox) ( Zimmern ob Rottweil, 15-05-25 )
Compared to the conventional cleaning media used in wafer and cell manufacturing, cleaning with ozone and water offers several advantages. However, ozone places high demands on workpiece carriers. Made from polyvinylidene fluoride (PVDF), the new ecoCarrier from ACI AG is not only resistant to ozone but its smooth surface and increased stability also aid process optimization. The ecoCarrier features further attributes, such as an optimized slot form for automated handling, torsional stiffness and a resistance to high temperatures, thus adding to its advantages.

Lower costs, better cleaning results and compatibility with the environment are the main reasons why ozone is being increasingly used by the solar industry as a cleaning medium in their wafer and cell manufacturing processes. However, the allotrope of oxygen reacts very aggressively with a wide range of materials, such as polypropylene (PP). That’s why the company ACI AG decided to develop its tried-and-tested PVDF ecoCarrier for processing mono- and polycrystalline wafers/cells. The carriers are designed to hold the standard substrate sizes of 156 x 156 mm and 125 x 125 mm but can be adapted to other formats. The polyvinylidene fluoride plastic is fully resistant to ozone. Furthermore, it has a smooth surface, meaning that liquids to run off it better. This further reduces the amount of contamination transferred via these carriers and also makes inscriptions more legible.

Safe handling due to high stability and dimensional accuracy
Because a different joining technique has been used, the PVDF carrier is even more stable than its predecessors. Its combination of an optimum slot form and high chemical resistance make it ideal for long-term automated loading and unloading processes. The low dimensional tolerance of just 0.1 mm means that placement systems don’t have to be readjusted each time for a new carrier or batch – regardless of whether it’s the start-up of production or later purchase of workpiece carriers. The slot form also ensures that very thin wafers/cells, e.g. with a thickness of 130 µm, can be processed easily without adhering to one another.
The fact that the ecoCarrier retains its torsional stiffness in conditions with high, severely-fluctuating temperatures is also advantageous as far as processes are concerned. Even if temperatures fluctuate by 40°C, its dimensions remain so stable that workpieces can be loaded and unloaded without any risk of damage.
Contact: ACI AG, 78658 Zimmern, Germany, Phone +49 741 1752990, info@aci.ag, under www.aci.ag.

Many thanks in advance for sending a specimen copy or publication link.