Plenty of light for a modern working environment

Facade of 3M Dyneon ETFE in the Hamburg "Harbor City" 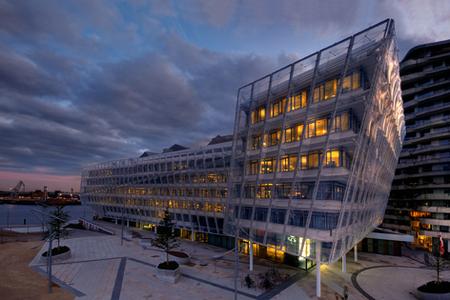 (PresseBox) ( Neuss, 11-05-24 )
A new example of great architecture has stood since September 2009 directly on the River Elbe, in the harbor district of "HafenCity" in the Hanseatic City of Hamburg: the new, state-of-the-art Unilever Headquarters for Germany, Austria and Switzerland can well be described as an office block of the new era.

The Unilever building combines openness, vitality and quality of life in a quite unique way. The individual departments within the building are linked by means of stairs, bridges or ramps. From their so-called "open space workstations", employees can enjoy the view over the HafenCity and the Elbe or look out on the central atrium, which forms the core of the building. It was therefore no accident that the building was honored with the World Architecture Festival Award at the end of 2009 as the "Best Office Building in the World". Around 6,400 m2 of high-performance film of the fluoropolymer material Dyneon(TM) ETFE are incorporated in the facade of the office complex, making it one of the largest single-layer film facades in the world. Ever greater numbers of architects are taking advantage of the benefits of these light film structures, which combine the possibilities of great freedom of design with very favorable properties as regards light.

The innovative facade was executed by the company Vector Foiltec in Bremen, a worldwide technological leader in the field of innovative building with ETFE. The membrane casing consists of individual TEXLON® facade elements, with NOWOFLON ET® high-performance film stretched over, which were placed in front of the insulating glass of the building. The film was manufactured by NOWOFOL Kunststoffprodukte GmbH & Co. KG from Siegsdorf. NOWOFLON ET® high-performance films made of Dyneon ETFE exhibit tensile strength of much more than one tonne per meter while weighing themselves only half a kilogram per square meter. They are also characterized by very high tear and puncture resistance, resistance to hail and excellent transparency in visible light - which has a very positive effect on the atrium of the Unilever headquarters. Because of their low-energy surface, which does not offer any opportunity for molds and bacteria to adhere, a simple shower of rain is sufficient to clean the facade. A particular benefit for large-scale buildings ,such as this, is that the highly-transparent films of Dyneon ETFE are fire-classified according to Class B1. The lifetime of the films also fulfills expectations, as the material has demonstrated its worth in architectural applications for more than 20 years and has proven extremely hard wearing. This means that these films are virtually maintenance-free - an important factor when calculating costs over the entire life cycle.

Dyneon, a 3M company, is one of the leading fluoropolymer manufacturers in the world and is represented in more than 50 countries. The company, headquartered in Oakdale, Minnesota, USA, employs more than 700 people worldwide.

A recognized leader in research and development, 3M produces thousands of innovative products for dozens of diverse markets. 3M's core strength is applying its more than 45 distinct technology platforms - often in combination - to a wide array of customer needs. With $23 billion in sales, 3M employs some 75,000 people worldwide and has operations in more than 60 countries.