Decisive features for robust use 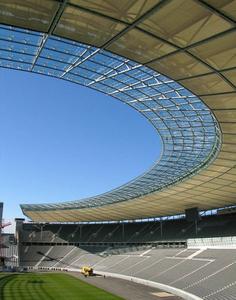 (PresseBox) ( Neuss, 11-05-24 )
When building stadiums, planners are increasingly taking advantage of the benefits offered by membrane architecture, enabling the creation of new and modern forms. Two well-known examples are the Olympic Stadium in Berlin and the Green Point Stadium in Cape Town.

The framework conditions for the new roof of the Olympic Stadium in Berlin placed considerable demands on the architects, as the roof had to remain within the footprint of the existing grandstand structure, which is listed as a building of major historic interest. At the same time, supports and masts should restrict the view of the spectators as little as possible. More difficult still: the new roof had to be installed without the need to cease operation of the stadium. A light steel cantilever arm construction was selected for the roofing around the circumference of the stands, with an opening above the historic Marathon Gate. This also means that the line of sight to the green of the Maifeld and to the bell tower - so important to the conservationists - is preserved. 132 external supports and 20 slim boom supports in the upper stand area, with a diameter of 250 mm at their base, bear the majority of the weight of the steel structure of the apparently "floating" roof. The company Hightex GmbH in Rimsting - a specialist in the area of textile architecture - covered the upper side of the support structure with 27.000 m² of woven glass fiber membrane distributed over 77 individual sectors. The membranes consist of woven glass fiber fabric coated with 3M Dyneon PTFE and 3M Dyneon Fluorothermoplastic, which exhibits tensile strength of up to several tonnes per square meter whilst weighing only one to one and a half kilograms per square meter.

The Green Point Stadium in Cape Town was newly built for the 2010 Football World Cup. In this case, a multifunctional arena was created with a spectator capacity of 68,000 seats, all offering the best-possible view. The flowing facade of the stadium consists of an abstract, light membrane structure consisting of extensive concave elements. The translucent surface absorbs and reflects daylight in a unique fashion: at sunset the stadium shimmers with a reddish light, which turns blue on summer days and gray during unfavorable weather conditions. The wave-form roof was clad with composite safety glass and covered on the interior with a translucent membrane skin. Technical elements such as sound equipment and lighting could be integrated between the glass cladding and the membrane. Verseidag Indutex GmbH in Krefeld, a company specializing in textile architecture, supplied the textile load-bearing structures made of duraskin® membranes. Various coating processes on different carrier and coating materials result in optimum protection, similar to a second skin. The duraskin® membranes also consist of glass fiber textile material coated with Dyneon PTFE and Dyneon Fluorothermoplastic, which exhibits tensile strength of up to several tonnes per square meter and only weighs between one and one and a half kilograms per square meter.

The coating provides the membrane with the features that are decisive for robust use in stadium construction: the surface of the coating is very smooth and is permanently resistant even to extremes of weather - as long years of experience in different climatic zones testify. In addition, Dyneon PTFE is resistant to virtually all chemicals and exhibits good mechanical characteristics. A major advantage of PTFE coatings is that they do not require softeners or stabilizers, which can evaporate over time, leading to embrittlement of the coating. Membranes coated with Dyneon PTFE and Dyneon fluorothermoplastic remain smooth and elastic, offering no cracks where bacteria or molds can gain a foothold, even after several years. And even after many years in position, a shower of rain is generally sufficient in order to clean the roofs. The translucency of the fabric guarantees optimum lighting conditions for spectators and players during daylight.

Dyneon, a 3M company, is one of the leading fluoropolymer manufacturers in the world and is represented in more than 50 countries. The company, headquartered in Oakdale, Minnesota, USA, employs more than 700 people worldwide.

A recognized leader in research and development, 3M produces thousands of innovative products for dozens of diverse markets. 3M's core strength is applying its more than 45 distinct technology platforms - often in combination - to a wide

array of customer needs. With $23 billion in sales, 3M employs some 75,000 people worldwide and has operations in more than 60 countries.

3M and Dyneon are trademarks of 3M Company. Duraskin is a registered trademark of Verseidag Indutex GmbH.